The Beauty of Woman by Alain-René Hardy 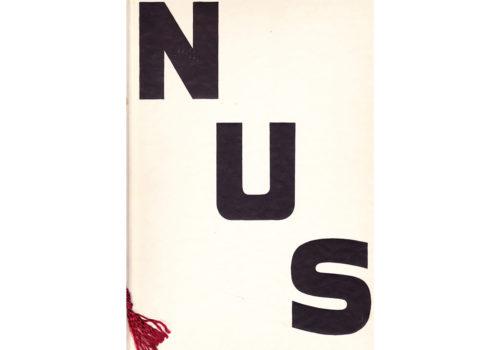 Album of the 1st International Exhibition of Nude Photography, Paris, 1933

NUS   NUS   NUS… If an even larger typography had been possible, no doubt it would have been used to tag this album; but, it was downright impossible in this case since these three letters N.U.S. arranged diagonally occupy the entire surface of the cover [Ill. 01]; [Fig. 02], imposing itself imperatively. This huge oversized NUS was also quite provocative in this France at the end of the Roaring Twenties, still prudish despite the naked exhibitions of Joséphine Baker at the Champs-Élysées theater and the reviews at the Folies Bergère or those of the Moulin Rouge galvanized by  Mistinguett. Wouldn’t it still be a little today?

Everything was done to catch the eye with this oversized title, ‒ especially mine, while I was antiquing at the Vanves flea market, it encouraged me to open and leaf through this enticing collection. It was love at first sight: everything was magnificent in this album born fifty years earlier: starting with the photos, which are simply beautiful ‒ as well as the bodies, and of a remarkable presence highlighted by irreproachable prints, as much as the neophyte that I was could judge; some undeniably just emancipated from the imitation of pictorial representation, others more inventive in their research into framing, light, contrast, and some even clearly avant-garde, if only through the use of innovative technical processes such as overprinting [Ill. 03], solarization [Fig. 04], or intentional blurring [Ill. 05]…

Taken mostly in studios, but also in the open air for a third of them, the photos reproduced in no particular order, were printed in full page on a strong paper of good quality discreetly tinted, with a technical process, heliogravure, with which I became familiar later, which gently manages strong contrasts between dense and deep blacks and elegant shades of gray. This album of photos, aesthetic rather than erotic, undeniably had many assets to win me over, including an original Japanese binding that assembled it with distinction using a red cord. What a revelation! a dazzle. It was not at all what I had come here to look for early in the morning, but I had money in my pocket and this album which so seduced me was in my hands; how could I resist?… So I went home with my first anthology of nudes, which thus made its entry not into my collection which did not even exist in dreams, but into my library, where it now constitutes the core of what has grown into this now so pervasive set of more than a thousand titles.

But who, however, was this Daniel Masclet (1892-1969) who, with the help of his wife Francesca mentioned in the prologue, had ventured to set up this “premier salon international du nu photographique” hosted during the year 1933 by the famous (at the time) Galerie de La Renaissance on rue Royale? Involved for a long time in photographic creation, this just forty-year-old recognized within the profession, had cut his teeth with the famous Baron de Meyer, appointed eye of Vogue for a whole decade. In contact with this perfectionist esthete, Masclet had integrated rigor and exigency in the shooting as well as in the printing; a lesson that he used in his future evolutions which led him to become, in addition to active animator of his corporation, first and foremost a master of portraiture, and later of landscape. This did not prevent him from also producing a few nudes, eclipsed in his publication, ‒ just like those, rather disappointing, of Moral, as well as those of Verneuil [Ill. 06] whose collection of 24 nude studies, Images d’une femme, had just been published by the young publishing house founded by Robert Denoël ‒ eclipsed, I was saying, by the visions of many of his colleagues, like Louis Caillaud [Ill. 07] stamped with a suave poetic candor.

Very well informed of current creative events, Masclet had invited to his exhibition more than fifty photographers of fifteen different nationalities, among whom, in addition to France, the most strongly represented were Germany, the United States and Great Britain, without omitting certain central European countries, such as Hungary and Czechoslovakia, where photographic research was remarkably active, for which we owe here a few shots by Drtikol (Ill. 08), extraordinarily inventive in his use of geometry and, with a clearly different intention, that of Lázló Moholy-Nagy (Ill. 09).

One cannot fail to wonder retrospectively about the selection of Masclet (dependent, it is true, in part on material considerations of which we are unaware) he had at the same time requested nudes from compatriots specialists in the genre, almost forgotten today, such as Verneuil and Caillaud as well as Marcel Meys (to whom I will devote one of my next columns), but he had also neglected, fortuitously or intentionally, for reasons not necessarily artistic, confirmed colleagues such as Roger Schall, Emmanuel Sougez, Maurice Tabard and Lucien Lorelle, his Parisian competitor for portraits; even among the foreigners staying in Paris, Germaine Krull and Brassaï, whose careers as photographers had only just begun are notable absences. Nevertheless, he was particularly well informed about photographic news abroad. To which we owe the presence at his exhibition, ‒ and subsequently in this album, of the main American professionals, William Mortensen, George Platt-Lynes (Ill. 10) and Andreas Feininger… But how not to notice the  incomprehensible absence of Imogen Cunningham and Edward Weston whom Masclet nevertheless worshiped later.

Certain well-known actors from the English scene at the time had also been invited, among others Bertram Park, author with his wife Yvonne Gregory of numerous publications illustrated by nude photography (The beauty of the female form, Routledge, 1934), Bernard Leedham, Fred Peel (Ill. 11) and Maurice Beck (Ill. 12), in charge during the 1920s of the photographic department of English Vogue, for which Masclet revealed his keen inclination through numerous reproductions. A copious representation of the bubbling German school had been selected (although the first world war had only been over for fifteen years) including, in addition to Bruno Schultz (Ill. 13) and Alfred Grabner (Ill. 14) who will publish for one an introduction, the other an anthology of the nude at the end of the decade, the essential Perckhammer (Ill. 15), present in all the collective nude brochures published under the Weimar Republic. Franz Fiedler, author a few years ago of the beautiful portfolio of Künstlerische Aktaufnahmen (Artistic nudes; Berlin, c. 1925) is unfortunately not represented here at the height of his talent. We also note the presence of the Berliner Hans Robertson (Ill. 16), misunderstood in France, wrongly as our illustration proves, ending with Z, the modernist photographer Willy Zielke (Ill. 17), a follower of Neue Sachlichkeit, who in turn published after the Second World War a brief but incisive introduction to nude photography.

Browsing through this picture book “à la gloire du corps humain” (“to the glory of the human body”), as French naturists would soon express themselves, is a joy that those who have had the privilege of doing so will not forget. However, this publication was not a real success with the general public (it was still new during the 1970s), but on the other hand its impact was significant in the world of photography, and barely two years later, the Forme editions hastened to publish under the title Formes nues a competing volume on the same subject, of the same size, with the same layout, presenting numerous analogies with that of Masclet, but above all significant differences which can be explained in this formula: Formes nues (Ill. 18) constitutes the unquestionably radical “new vision” of the rather conventional edition (according to the severe judgment of Christian Bouqueret) of La beauté de la femme; what is metaphorically represented by the confrontation of the helical metal binding of one against the assembly by cotton ribbon of the other.

It would be instructive to systematically compare the content, but that would take us too far today; we will come back to it one of these days.