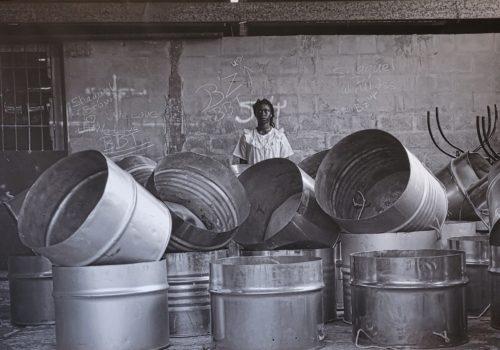 Rencontres de Bamako, chapter 2 – A House made of Fingers

The railway station in Bamako is an iconic place in the Malian capital. Without its passengers, without its trains, it arouses fascination and sadness. Two years ago, a train connecting Bamako to Kayes gave its last breath to the colonial building. It took 18 hours and 30 stops to reach the capital. But the finest hour in Malian railway history was the Bamako-Dakar link by the Dakar Bamako Express (DBK), engraved in Roman letters on the station hall floor. A service 1287 km long and which would cost between 800 million and 3 billion to be relaunched.

There remains the building inherited from the French colonial time and which seems, with its yellowed stone, its tin counters, its period lettering, its huge spaces under vaults and its yellowed paint, to be the perfect place for a time of observation. The Biennial’s exhibition is also cleverly scenographed, the cross-shaped picture rails offering the reading of two artists “back to back” against the background of the orange walls of the station.

The installation of Gherdai Hassell is a little wonder to observe. The Bermuda-born artist, who now lives in the UK, presents a diptych built around a leporello and a photographic work entitled What Remains To Be Seen (2021). On the wall, the photographs intermingle and superimpose archival images of the African diaspora to recompose them into new figures, which the artist calls “monuments. She mixes faces, cultures, imaginaries, trajectories and histories as if to assert the power of a future formed from past legacies. The book-accordion (leporello) plays on the same pink and ochre tents and seems to weave between each page a more dreamlike narrative of this vision.

Anique Jordan is another figure to remember in this second exhibition. Her series “Salt” forms a memorial exploration of her own family history on the island of Trinidad and Tobago. She immortalizes in several frozen, rather distant portraits, the same woman dressed in the traditional white dress of the island in front of everyday objects: huge iron pots, fish stalls, in the kitchen or on the stoop of a house. The frozen, almost absent posture of the model recalls archetypal colonial imagery – visible and brilliantly dismantled in the current exhibition Colonial Decadence at the Centre Pompidou.

Anique Jordan’s stagings unsettle the eye. The woman cannot be missed, even if her presence remains ghostly. Her figure forms a tipping point between a still life and a genre scene, both impossible. Above all, she speaks of the permanence of stories, memories and liabilities and the need for the artist to seize them in order to live.