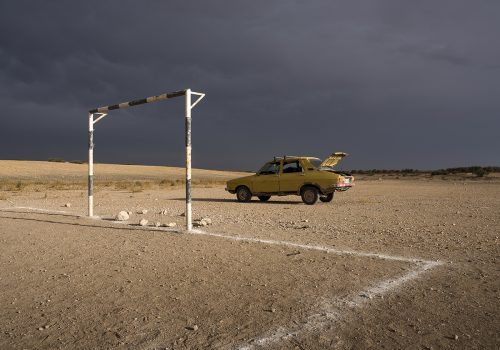 The 12th edition of the Bamako Encounters – African Biennale of Photography started last November 30th in Mali. Long awaited by all the artists and professionals who came to the event, the award ceremony was held the day before the end of the professional week.

New prizes appeared this year, including the Prize of the President of the Republic of Mali, in line with the appointment of the Malian Head of State, Ibrahim Boubacar Keïta, as coordinator of the African Union for the Arts, Culture and Heritage in 2019 in Addis Ababa. This is also the case for the Okwui Enwezor and Bisi Silva Awards, which were created in homage to the two famous curators and thinkers who died this year, with the desire to recognize and perpetuate the memory of their contributions to the world of art and their support for artists from the African world.

The announcement of the winners took place following the deliberation of a jury chaired by Christine Eyene (Curator, critic and art historian) and composed of Dana Whabira (Artist, architect and founder of the Njelele Art Station), Uche Okpa-Iroha (Photographer who won the Seydou Keïta Prize twice, founding member of Blackbox Collective and Invisible Borders, Director of the Nlele Institute) and Arthur Kibbelaar (Collector and diplomat).

Despite the high number of proposals presented during this 12th edition of the Bamako Encounters – 85 precisely, the members of the jury took great pleasure in conscientiously analyzing the works of all the artists in order to meet the criteria advanced by each prize. The eight artists who have been awarded are:

Award of the President of the Republic of Mali: Khalil Nemmaoui

Khalil Nemmaoui presents the Air Twelve land series (2019), a project highlighting the presence of the Renault 12 in Moroccan landscapes to approach, with subtlety and poetry, different characteristics of our modern consumer society. The R12 here becomes an object imbued with a certain nostalgia and a symbolism linked to its own personal mythology. Personifying the old car model, he paints a portrait of a new genre to demonstrate its reliability over time and question the notion of the value of objects.

Rewarding an African female artist whose works show signs of promise and development, the Centre Soleil d’Afrique Award was awarded to the young Egyptian photographer Amina Ayman Kadous, who presents the photo installation A crack in the memory of my memory (2019), a work produced as part of a carte blanche by Al Safar in partnership with Darb 1718. It is a very personal reflection on the way we build our memories through trajectories anchored in the space-time of our experiences. This work takes as a starting point her own childhood during which she borrowed every week the same path between the family home of her father and that of her mother, and then wondered about her history and that of her ancestors.

This award, which distinguishes the philosophy and concept of re-imagery and contribution to international artistic expression, goes to photographer Abraham Oghobase for his series Anatomy of Landscape (2018). The series highlights the dialogue he tried to create by integrating his own body into landscapes of the Jos Plateau region, in Nigeria, landscapes that carry the stigma of past and present abusive mining activities, initiated by the British colonies.

In line with her desire to encourage research, education and excellence in artists in Africa through her work as director of the Contemporary Arts Lagos Center, the Bisi Silva Award this year is awarded to the South African Buhlebezwe Siwani. Her two-channel video installation, Ama Hubo, discusses the impact that Western Christian conquest and colonization may have had on native religious and spiritual beliefs, and the perception of the black woman’s body.

Christian Nyampeta is rewarded as outstanding lens-based media artist. In his film Sometimes It Was Beautiful (2018), he fictitiously confronts renowned filmmaker Sven Nykvist with personalities, Andrei Tarkovsky, Yasser Arafat, Leela Gandhi, Rigoberta Menchu, Robert Mugabe, Wole Soyinka, Crown Princess Victoria of Sweden, Winnie Mandela, the 14th Dalai Lama. This dialogue establishes a critique of the ethno-documentary short film produced by Nykvist in the Congo between 1948 and 1952, In the Footsteps of the Witchdoctor. Christian Nyampeta denounces the filmmaker’s ethical responsibility for the direct and indirect violence against black people inherent in this film and questions how history can be written and cannot be rewritten.

The OIF Award goes to Léonard Pongo as a daring young artist aged 25 to 35. With an infrared camera sensitive to ultraviolet rays, Léonard Pongo surveys the flooded territories of the DRC in order to capture the invisible to the human eye. In his series Primordial Earth (2018-2019), which evokes the Luba esoteric beliefs, he creates new imaginations, halfway between fiction and science, vis-à-vis these mysterious landscapes.

Amsatou Diallo receives the distinction of best Malian photographer with her series Scènes de vie (2017-in progress). By superimposing a past and present iconography of daily life and popular African culture with urban landscapes that she captured in the city of Wilson, in North Carolina, United States, Amsatou Diallo opens a reflection on the complexity and the precariousness of African identities in the era of globalization.

As for the Seydou Keïta Award, which rewards the best creation of the 12th edition of the Bamako Encounters, and which is awarded to an artist who develops critical thinking in the execution of his/her work and whose work represents an unusual approach  and is technically remarkable, it goes to multimedia artist Adeola Olagunju. With the photographic piece Transmutations (2018) and the video installation Pilgrimage (2018), Adeola Olagunju explores the psycho-spiritual transformation that aims to reach the divine self, the true self.

If each of the artists presented at the Bamako Encounters were worthy, it is undeniable that the winners have all done remarkable works from an aesthetic and conceptual point of view. There was great satisfaction in being able to witness all the outpouring of emotions by the winners and to perceive the encouraging effects produced by these prizes.

Léonard Pongo speaks about his feelings about the OIF Prize he received: “It is an absolute surprise! I did not expect to receive awards for this brand new project at all, and am deeply touched that it found a receptive audience. The OIF award will allow me to continue the project on which I intend to focus for the years to come. The members who constituted the jury and who awarded the prize are also great African artists and curators. Knowing that they appreciate my vision, and the bond to the land and traditions that inspired it, and that they are awarding this prize to work that highlights the DRC also makes me very proud.”

All that remains is to wish good luck to Léonard Pongo and all the winners of this 12th edition of the African Biennial of Photography, so that more successes come in the years to come.