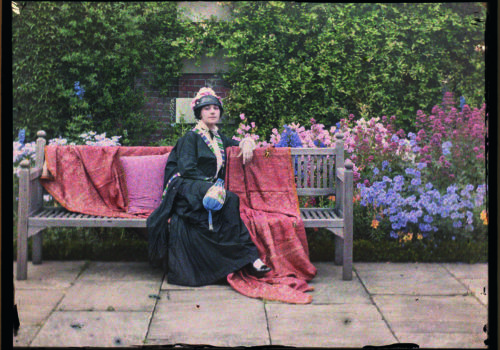 The invention of the Lumière Brothers, the ‘Lumière Autochrome’ was released publicly in 1907. A glass-based process, the autochrome comprises a layer of silver gelatin emulsion on top of a colour filter made of thousands of potato starch granules dyed red, blue and green. These granules are what produces the colour in the plates. The autochrome would become the first widely accessible and commercially successful colour photography process. It was declared a ‘revolution in photography’ and was embraced by amateurs and artists alike. Famed Pictorialist photographer Alfred Stieglitz predicted: “soon the world will be color-mad and Lumière will be responsible.” It remained popular for much of the earlier twentieth century, with millions of plates produced at the Lumière factory in Lyon. The arrival of alternative colour photography processes marked the end of its market dominance and production of autochrome plates ceased in the 1930s.

The Victoria and Albert Museum (V&A) holds an internationally significant collection of autochromes, numbering over 2,500 plates by among the most noted amateurs and artists of the period, including Alvin Langdon Coburn, Baron Adolph de Meyer, Helen Messinger Murdoch, and Henry Essenhigh Corke. Owing to their extreme light sensitivity and inherent fragility, autochromes cannot be exhibited. Given their sensitivity to light, it is perhaps ironic that plates can only be viewed when illuminated from behind, or backlit. For this reason, to view works, the V&A adopted a strict policy: viewing can only take plate in near complete darkness on a light box set to a low lux, or light, level, and then only for less than one minute.

The inability to easily view the collection heightens the significance of Thames & Hudson’s upcoming publication Colour Mania: Photographing the World in Autochrome produced in collaboration with the V&A. Released October 2022, Colour Mania features highlights from the V&A’s autochrome collection photographed especially for the publication and many are reproduced for the very first time. Featuring over 300 illustrations, plates are shown true to size, providing a realistic sense of their scale and objecthood in the absence of being able to view the works in person. The publication is organised thematically to highlight those colourful subjects sought by ‘autochromists’: portraiture, gardens, still life and travel images. Spotlight sections discuss notable photographers held in the collection, including many largely unexplored but nonetheless pioneering photographers. The publication is informed by the latest research by curator Catlin Langford who spent over a year working with the V&A’s collection of autochromes and researching archival sources in the Royal Photographic Society collections.

The publication demonstrates the multifaceted nature of the autochrome: used to both document and express, at once modern in their vibrant colour, and an insight into the past through painterly, dreamy and beautiful images.