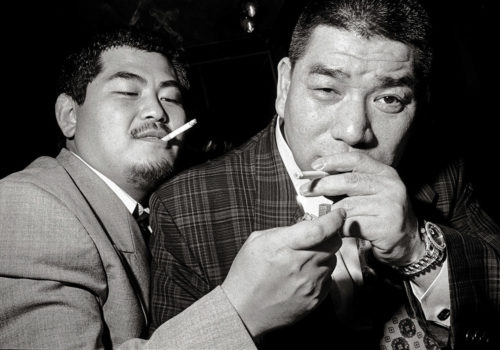 Losing Something in Translation by Sean Sheehan

In Bruce Gilden’s Cherry Blossom, a photobook where faces matter, the eyes that without menace or some degree of consternation most memorably look back at you are those of a resigned-looking dog photographed at a low angle. Gilden went to Japan in the1990s and the result is what you might expect from someone whose signature style — abrasive trespasses into what little personal space pedestrians might have in crowded sidewalks – has rarely wavered over the long years of his career.

In a way not dissimilar to Sophia Coppola’s approach in Lost in Translation (2003), with its recycling of a stereotyped Japan – a land inscrutably, laughably foreign – Gilden presents a tableaux of familiar figures – but without the humour. Scenes in the movie are designed to occasion benign smiles while, a decade earlier, Gilden was drawn to faces on the street that elicit either palpable senses of menace or sorrowful recognitions of forsakenness.

The threatening quality implicit in menace is found in the Yakuza, members of the city’s traditional crime groups, popularized in the West in Ridley Scott’s Black Rain (1989), a film released a few years before Gilden’s trip to Japan. He photographs them in his typical close-up way, with expressions ranging from the leery to the intimidating, though some are the result of conscious posing, not of the surprise flashgun-in-the-face approach that Gilden made his own on the streets of New York. One of the best, showing a dutiful Yakuza lighting the cigarette of his superior, came about when such a moment was noticed by Gilden in a café and he asked the pair to replay the act. As with other tough-guy shots in the book, there is a thin line between capturing their faces unawares on the street and recording their rehearsed cold stares and postures. In the first photo in Cherry Blossom a man’s hands are held close to a train’s window and the viewer looks as if expecting to note a missing portion of his little finger (the Yakuza’s infamous method of atonement for a wrongdoing).

There is little sense of the forsaken in the shots of gangsters but it comes across strongly in the faces of the homeless that are also seen populating the streets of Tokyo. What is not communicated is any notion of the face evincing responsibility for the Other, along the lines that the French philosopher Levinas has drawn attention to; when victimhood is evoked, as with the pictures of individuals defeated by alcohol or poverty, it is served cold by Gilden.

Cherry Blossom is testimony to a flinty realism – at best, a secular purity – and a practised penchant for arresting physiognomies but the predictability and lack of empathy should come as no surprise to anyone familiar with Bruce Gilden’s photography.