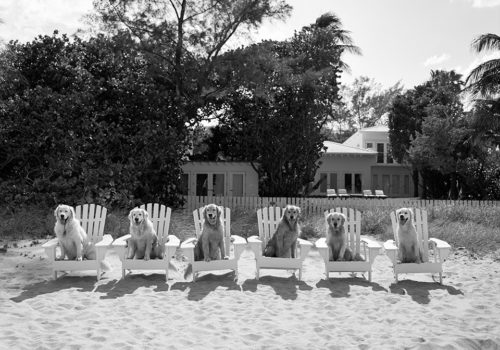 When Bruce Weber photographs the dogs of his life

Photographer and filmmaker Bruce Weber is known for his immense oeuvre : warm portraits of artists, actors and athletes; fashion stories loaded with emotion, irreverence and nostalgia; lyrical tributes to eroticism; Arcadian vision of the American landscape… without forgetting the golden retrievers. From his earliest days, Weber has traveled with a pack of these lovable beasts that populate his advertising campaigns and reportages for major magazines as well as his personal albums. For the first time, The Golden Retriever Photographic Society reveals these photos taken throughout his career and which he often sees as the most personal part of his work. In his introduction, he notes: “Sometimes people say to me: in my next life, I would like to be one of your dogs.” This book shares this feeling with us. For five decades, these dogs, fully-fledged players in the wonderful existence that he and his wife Nan Bush have created for themselves, have fueled his imagination. This book celebrates the human / animal bond and shows how connection with a four-legged companion can nurture creativity, provide irreplaceable companionship and offer joy.

About the photographer and author:

Photographer and filmmaker Bruce Weber gained international fame in the early 1980s for his work combining a classic style with an intimate atmosphere not devoid of sexuality. The sense of drama, the mastery of emotions are at the heart of the image of brands like Ralph Lauren, Calvin Klein, Versace, Abercrombie & Fitch that he helped to forge, which has earned him a remarkable presence in many leading magazines. Through films of various formats, some forty books and more than 60 exhibitions around the world, Weber has also explored, throughout his career, the nature of human relationships.

Jane Goodall is the leading chimpanzee specialist she has studied for sixty years in Tanzania. At the origin of the Jane Goodall Institute, a leading organization in the protection of chimpanzees and their habitat, for thirty years she has been raising awareness of the threats of which they are victims as well as environmental problems in the hope that humanity will be able to solve them. In 2002 Jane Goodall was appointed United Nations Messenger of Peace and in 2004 Dame of the British Empire.

Dimitri Levas has been designing books since 1985. He is responsible for numerous works on Robert Mapplethorpe, catalogs and several projects with Bruce Weber. He is President and Artistic Director of The Robert Mapplethorpe Foundation.

Also available in another Art edition (numbers 1 to 100), accompanied by the print Little Bear Ranch, Montana, 1996, numbered and signed by Bruce Weber.

Pigment print on Hahnemühle paper Ultra Smooth, signed, dated and numbered by the artist on the back; workshop stamp on the back,