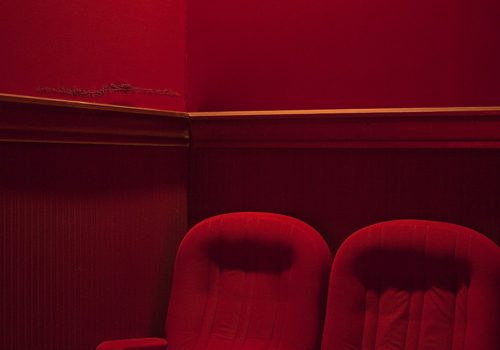 When the moon is half way down

Sometimes when the night is dying

I take me out and I wander around

A landscape swallowed in the mist, a gangway to a pontoon that is drowning in the dark water, a staircase that ends against a blank wall, a light under a closed door. These are just a few images from the exhibition by Peter H. Waterschoot.

Peter H. Waterschoot (1969) strolls through Ostend, Brussels, Berlin, Venice & Osaka, and like this text, he wanders between Rock n Roll (the present) & classical inspiration (Japanese aesthetics, in his case). He didn’t set a goal, but is led in his walkabout by the moment. He roams between dusk and dawn, past dimly lit rooms with closed curtains. He shows us his fleeting impressions, but the images suggest smells & touches. He brings a moody trip between feeling and seeing, between reality and feverish illusion. His images are strange and recognizable, here and nowhere, without a clue. The result is a visual poem of images, but even more of tonalities. It may feel as a contradiction, but the images are hermetic and accessible. You don’t look to see, but you slip your eyes to feel.

Or as Xavier Canonne puts it

« The nights have taken the hues of the wait. It’s all about experiencing the silence of rooms and corridors, of deserted lounges; let yourself sink to hear the night breathe. Wait patiently in the faux leather or velvet armchairs, under the dimmed neon lighting, of an old-fashioned bedside lamp, near a bed stretched for an already shortened night; a glancing touch at these paper flowers, these alarm clocks , all props on a small stage with actors endlessly playing the same scene time & time again. »

A visit to this exhibition is almost a zen exercise: just like the best images are made when the photographer doesn’t feel the urge to make a picture, you should not want to grasp the series in the exhibition Sunset Memory. Waterschoot likes to refer to the essay on Japanese aesthetics In Praise of Shadows / l’Eloge de l’Ombre by Jun’ichiro Tanizaki (1886-1965), which focuses on sensitivity to the ephemeral, to change and thus to transience. This essay also contains an implicit critique of Western modernist thinking, a critique of determinist thought.
In the same mindset the photographer describes his work on the cover of his book as:

Into an abyss, a paroxysm

Memory is not a retrospect, he says, but a paroxysm. And how do we interpret the concept – as an apogee, a climax, or quite differently as a convulsion, an attack, a gloom or a moodiness? The latter interpretation does correspond to the characters from Tanizaki’s novels: they are driven by their passions and by the stimuli of their environment. Waterschoot explains without trying to explain, he lets us go our way, we are left to our own analysis.

Conclusion: a good exhibition (and publication, but please read on) of a ‘young’ talent and thus, in addition to Witkin & Cornwall, another convincing argument to visit the museum in Charleroi

Life’s but a walking shadow, a poor player

That struts and frets his hour upon the stage

And then is heard no more.

The book contains 88 images and, like the exhibition, they can be read as a visual poem. In complement, the book also includes a cycle of 8 poems by the renowned Belgian author Peter Verhelst (1962), specially created for the exhibition and publication. Verhelst is a poet, novelist & dramatist in the Dutch-speaking region, and has been awarded many prestigious prizes. The poems in the book are translated into French, English and Japanese by experienced authors. The result is a strong recommendable four-language photo book. One remark: Peter Verhelst’s name isn’t mentioned neither on the front or the back cover, which does not seem correct to me, moreover the publication misses part of his potential audience.

Exhibition and publication do not correspond exactly to each other but are complementary, the book only contains images that were made in Brussels and Osaka. For the exhibition Waterschoot travelled to Ostend, Berlin and Venice. As a result, you can view the exhibition as a reflection of a development of vision, the growth of an artist.

Ordering is easy via:

For amateurs who are interested in the evolution of the author, or simply want to complete their library, the previous publication by Peter H Waterschoot is still available – but hurry, there are only a few copies left!