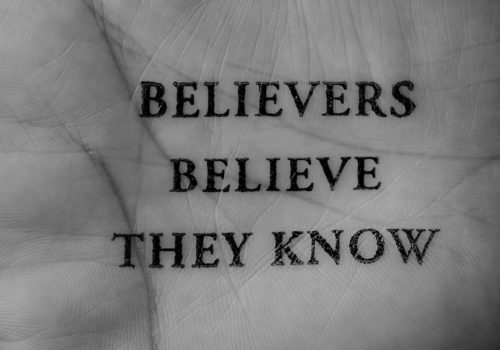 “Skinprints” are thoughts reflecting observations, insights and perceptions I have made over time.

Everything seems understandable if it has once been thought or experienced.

More difficult, however, is ‘today I’ve been you’ – a metaphysical experience about which, I think, one cannot speak.

The “Skinprints” are rubber stamp impressions on the skin and not image manipulation.

There are images that leave a lasting impression and there are statements that ring true – and then there are reflections and observations that somehow desire to be printed directly on the skin, such as Christian Vogt’s “Skinprints”.

Similar to the “Photographic Notes”, in which the artist has been bringing short texts into a relationship with images for forty years, these stated thoughts recognizably go back to lived experiences and to reflections that have been a long time in their development.

They are generally short and thought provoking observations, questions, aphorisms, almost always in English. They can probably be best described as the attempt to put larger truths into diminutive forms and simple words.

Some allude to current challenges in the political and social realm (”about the danger of assumptions becoming convictions“ or “believers believe they know”), some represent philosophical or metaphysical self-inquiries (”am I what I think I am“), some describe emotional experiences (”nights haunted by memories of injustices“ or ”to be one by night but two by day“).

That the artist uses English rather than his mother tongue may have personal reasons, but I believe it is also a technique of alienation that allows him to see things from a slightly different, more interesting angle. Some things just become clearer from a distance.

The writer Robert Musil once called the aphorism the ”smallest possible whole“ and as such each aphorism is a little universe to itself. But this book is not a book of aphorisms – or not just that. Rather it documents an intricate artistic project, consisting in the circuitous and laborious – and quite old-fashioned, explicitly non-digital – technique of making stamps out of texts and then physically applying them to human skin. In large part to hands.

To the eye, that will always be the central organ of any photographic endeavour, the “Skinprints” can be said to add skin and hands as focal points, thereby opening up considerable associative spaces.

Hands are doubtlessly the most important of our extremities: their opposable thumbs are after all what allow us many of our most specific human actions, such as the use of tools, the development of crafts, the invention of art. Hands are omnipresent – they are the first thing we extend towards the world each morning and that with which we cover ourselves each night. Metaphorically, but also in reality, hands are always the most present and the most self-evident. Things are at hand or handy, they are on hand, we know them first hand… Occasionally something gets out of hand…

In philosophy, hands have traditionally been treated with respect, but not reverence: compared to the mind they have always been of mere practical significance. In art however they are – at least since the Renaissance – omnipresent: just consider Albrecht Dürer’s Praying Hands or of Michelangelo’s Adam stretching out his hand towards the hand of God. Here the hand is not merely practical, but rather the connection between the spiritual and the material world. Hands not only literally allow forms to escape the confines of the mind and become physical reality in art or in writing; they are also symbolically the epitome of creativity and spirituality.

This symbolism is evident on almost every cultural and practical level – from the highest spiritual endeavours down to the trivial cheat notes that pupils scrawl on their hands since time immemorial.

Vogt’s “Skinprints” play with all of these connotations of hand, and especially, I think, with the tension between the spiritual and practical.

Just as interesting as the symbolism of the hand is the mental space opened by the usage of skin as a medium. Our skin is just as omnipresent as our hands and just as easily taken for granted. It covers all of our body and is our first and most fundamental access to the outside world: it is where pain happens, but also tenderness. Any historical notion of sensibility is connected to skin: you have to feel things on your skin before they reach your inner faculties – being thin-skinned or thick-skinned are expressions for emotional sensibility.

Moreover, skin is of course a type of boundary between my inner self and the outer world, but this is a very permeable boundary. Our skin is in no way an armour, but rather the constant reminder of our fundamental vulnerability. And of course, if you think about body art and traditional tattoos, skin is most likely the original place where art and artistic creativity begins.

All these thoughts – and potentially many, many more – are evoked by Christian Vogt’s “Skinprints”. Whatever each individual eye may find in them, it is bound to be something that touches an inner cord and is thought provoking.

I have known Christian Vogt for a long time and have always been deeply impressed by his obvious sensibility, his evident endeavour to feel and think about things differently – and to see them differently through his photographic lens. The exchange about this work was a great pleasure for me.

The German writer Martin Walser once wrote, “The experience of being understood is the most intense experience of all.” There seems little to add to that.