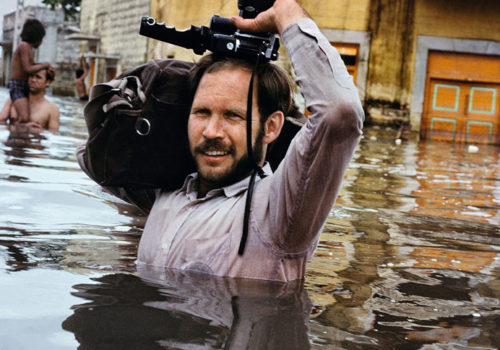 There would be few photographers who haven’t heard of Steve McCurry. This pioneering American photographer has spent thirty years traversing the globe in search of stories that reveal the human condition in all its guises. During his career he has created a wealth of photographs many of which have become icons of their time.

In “Steve McCurry Untold” he is once again moving into new territory. Capitalizing on the public’s voracious appetite for photography, which seems to know no bounds, “Untold” delivers a unique behind-the-scenes view of McCurry’s creative process weaving text and images to create a captivating tale.

Described as “one of today’s finest and most daring photographers,” McCurry is universally known for his portrait of a young Afghan girl, Sharbat Gula, taken in a refugee camp near Peshawar, Pakistan” in 1984 when he was on assignment for National Geographic. In “Untold” McCurry tells how he didn’t know the girl’s name at the time he took the photograph. It wasn’t until 2002 that he was able to track her down and put a name to the face that came to symbolize “the tragedy of Afghanistan and the dignity of its people in the face of war and exile”.

In this lauded photograph that is considered one of the great documentary images of the 20th Century, the girl’s piercing blue eyes stare from a face framed in a rich burgundy shawl. She sits against a defused forest green backdrop that draws focus to the patches of green in her costume. Once you meet her gaze the photograph reveals itself and it is a powerful communication. This is McCurry’s gift; a depth to his storytelling that enables him to capture a people in a single frame.

McCurry’s visual documentation of the Afghan people has earned him multiple awards and seen him return to this war torn part of the world numerous times over the past 30 years. He was first in Afghanistan in 1979, a 29 year old who entered illegally through Pakistan to get pictures of the brewing civil war. In 1980 he won the Robert Capa Gold Medal for best photographic reporting. Today he is a member of Magnum Photos, an agency that claims many of the world’s most awe-inspiring photojournalists in its ranks.

“Steve McCurry Untold” is a book of almost 300 pages. It is beautifully produced by one of the world’s most respected fine art photography book publishers, Phaidon. Every aspect of the book has been considered from the quality of the paper to the dust jacket and binding. It is a weighty tome and the first book to share McCurry’s unique visual approach in such detail. The book also contains personal notes, journal entries and memorabilia collected by McCurry adding to the intimacy of its revelations.

As well as being a visual delight “Untold” defines what makes a great social documentary photograph. In this context it is an important contribution to the discussion around the future of photojournalism as it reinforces that the skills employed in creating a visual narrative involve a complexity that extends beyond the capacity to click a shutter.

In “Untold” McCurry paints the stories behind 14 of his “most important assignments” including Afghanistan, Iraq and New York after September 11. But Asia has proven the most fertile ground for McCurry’s imagination. He has spent his career covering India, Bangladesh, Nepal and Tibet amongst other Asian countries, and “Untold” reveals McCurry’s tenacity in getting the story.

McCurry says photography has allowed him to “wander and explore, follow human stories, and encounter unusual, serendipitous moments that say something interesting, even surprising about life”.

“Untold” is a masterful publication that like the photographs it features, has so many layers that you will want to keep coming back to find out more about the world of Steve McCurry.