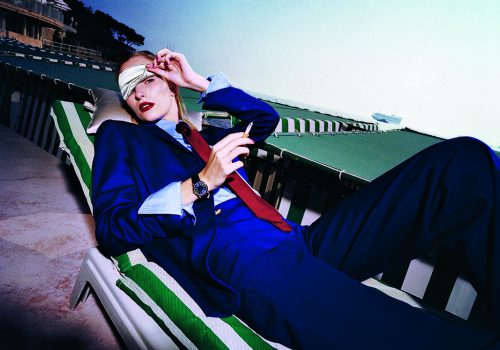 10 Corso Como Gallery presents the first exhibition in New York of British fashion photographer Steve Hiett. Curated by Fondazione Sozzani, Beyond Blonde by Steve Hiett features many of Hiett’s renowned images and videos, as well as his Polaroid collages and silkscreens, shown for the first time in the U.S.

For almost five decades, Steve Hiett has documented the changing world of fashion through his distinctive pop graphic, and even musical, imagery. Known for his vivid color style lit by using exterior flash, Hiett’s images are characterized by sharp, richly textured figures set against indefinable urban landscapes and radiant blue skies in deep focus. They tell stories, and the stories change with time. Whether it’s 1970s Miami, France in the 1980s, or New York at the end of the 20th century, Hiett creates an of-the-moment impression that feels neither contrived nor self-conscious.

“Whether I take them in Paris or Miami, my photographs are middle-class stories of the suburbs; they’re about being alone and dreaming,” he said.

Hiett’s work unveils an era of experimental fashion photography that emerged in the late seventies in the British, French and Italian magazines: “Things got simple….a camera and one 35mm lens. This meant I could travel light and keep things as simple as possible. Work fast, anywhere, anytime, any light… But if the photos of the clothes were not perfect, the picture would go in the trash. This way I learned about fashion photography”.

Philippe Garner, former Deputy Chairman of Photographs at Christie’s, wrote, “Steve, whose work has been such a distinctive presence in fashion and style magazines for over forty years, has the rare ability to keep finding fresh variations within the strictures that he has made his own”.

After a stint at the Royal College of Art, followed by a brief career in music as front man for the psych pop group “Pyramid” in 1966, Steve Hiett discovered fashion photography. His work has appeared in The Face, French Vogue, Harper’s Bazaar and Visionnaire, amongst many others. His clients include Oscar de la Renta, Roberto Cavalli, Guy Laroche, Fit Flop, Joop, agnès b and Lacoste, and he has shot celebrities including Jimi Hendrix, Sophia Loren, the Rolling Stones and Uma Thurman. In 2015 Prestel published a retrospective of Hiett’s work spanning five decades, entitled Beyond Blonde, with a foreword by Phillip Garner. Born in the UK in 1940, Hiett currently resides in Paris.

The Fondazione Sozzani was established in 2016 by Carla Sozzani and is dedicated to the promotion of culture through photography, fashion, the fine arts, and applied arts. The Foundation has assumed the patronage of Galleria Carla Sozzani, founded by Sozzani in Milano in 1990, and continues all relevant public functions that the Galleria has supported for the past 29 years. For more information, visit www.fondazionesozzani.org

Founded in Milan in 1991 by former fashion editor and publisher Carla Sozzani, 10 Corso Como is recognized as the world’s first concept store, with a curated mix of fashion, design and art in a succession of spaces alongside a restaurant and café and an art and photography gallery. 10 Corso Como’s visual identity, interior and iconic logos are designed by American artist Kris Ruhs, inspired by the idea of bringing art into the everyday environment. Over the past almost 30 years, 10 Corso Como has expanded internationally with venues in Seoul, Shanghai and Beijing. The Seaport District in New York is its first U.S. location. For more information, visit www.10CorsoComo.nyc