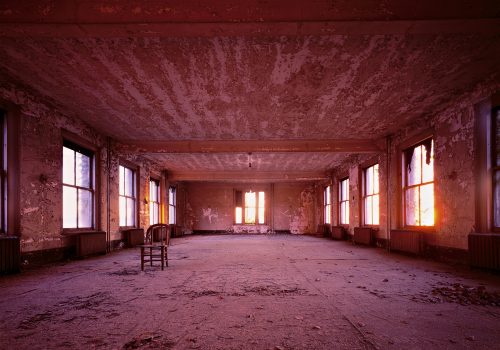 On the 20th anniversary of Stephen Wilkes documentary project photographing the abandoned buildings on Ellis Island, and with the the future of immigration and refugees in America in contention, Wilkes takes us on an unforgettable journey through our collective past that reminds us how we became the diverse nation that we are today and asks us to reflect on our own humanity.

Twelve million people passed through Ellis Island from 1892 until its closing in 1954, and tens of millions of Americans today are descendants of immigrants who were thought deplorable by those already here. Wilkes’s powerful images of the underbelly of the island—a purgatory between freedom and captivity—reflects on the defining experiences of millions.

Ellis Island: “Ghosts of Our Ancestors” is a collection of large format color photographs of the abandoned buildings on the southern side of Ellis Island. Photographed over five years beginning in 1998, the photographs are a visual history of the immigration center and adjoining hospital which grew to 22 medical buildings spread across three islands. In the era before antibiotics, tens of thousands of immigrant patients were healed from illness before becoming citizens. Neglected for almost fifty years, the buildings were in a state of extreme disrepair: lead paint peeled from the ceilings and walls, vines and trees grew through the floorboards, detritus and debris littered the hallways. In rooms long-abandoned, Wilkes captured a spirited new vision of this gateway to freedom.

Since opening his studio in New York City in 1983, photographer Stephen Wilkes has built an unprecedented body of work and a reputation as one of America’s most iconic photographers, widely recognized for his fine art, editorial and commercial work.

In the photographer’s own words:

“In the southern shadows of Ellis Island’s Great Hall, forgotten by history and ill-equipped in its battle with nature, I came upon the ruins of a vast hospital: the contagious-disease wards and isolation rooms for the people whose spirits carried them across oceans but whose bodies failed them, just inches from Paradise.

The Statue of Liberty loomed over my shoulder, yet I felt no less an archaeologist than the first venturers into the Mayan tombs. I wore a respirator against the ravages of asbestos and lead paint.  I saw the shoes of immigrants long forgotten, shards of mirror, remnants of beds, the ruins of the autoclave, a chamber where tuberculosis- infected mattresses were sterilized with scorching heat.  I saw ancient Eveready batteries hooked to strange pipes, the first electro- shock therapy treatment ever conducted on these shores. I saw architecture that was fifty per cent the work of man, fifty percent the triumph of nature.  A surreal sculpture of vines and leaves and moss mingled, through the empty rooms, with shattered plaster, curling paint and rusted iron.

But mostly I saw life.

Not in an abstract sense – or in memory of the thousands, those who went on to find their dream and those who never left this side of the harbor — but in a tangible sense.  I felt the living presence of humanity, wherever I turned, in every room. It was an energy in whose presence I felt tremendous humility.

For two weeks after shooting the first group of pictures I was obsessed. I couldn’t sleep, I couldn’t erase the buildings from my mind. So I went back, many times. Three years in all, every chance I could. I photographed the ruins of Ellis Island in every season. I photographed every corner, every crevice, in every light.  Strange things happened.  I’d photograph a mirror attached to a wall for half a century, only to return and find the mirror shattered. I’d photograph a shoe, only to come back and find it disappeared. I photographed the 500-foot long spine of the hospital, Corridor #9, a long tunnel of decay. In the photograph of it, you’ll see a golden glow of sunshine warming the walls at the far end. In all the times I went back, I’ve never seen this glow again, nor can I figure out its origin.

What I was obsessed to do, almost as if I was chosen to do it, was document the light and the energy and living spirit of this place.  I added no light of my own, nor any artifice of the photographic craft. I wasn’t simply interested in graphics born from the patina of ruin.  I just wanted to record the place as I found it.

Working with the New York Landmarks Conservancy, I made a video. It was presented to Congress. Several years ago, they voted a $6 million grant to preserve South Island as a living ruin.

It was a triumph not without irony. In stabilizing the buildings, many repairs have been done, and many of the encroachments of nature have been removed. Which means the place will never again look as it does in these photographs, a moment in time captured between the demise of a place to which most of us can trace a family member, and its final resurrection as a landmark.”

Ghosts of our Ancestors