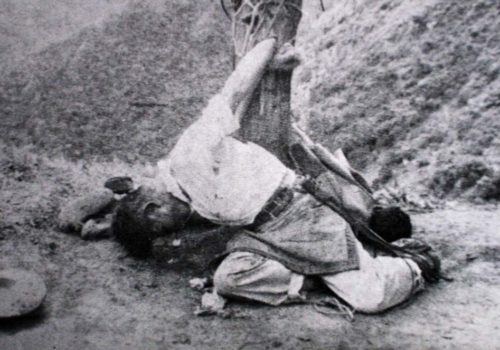 The title of the book itself announces Stephen Ferry’s completeness: “Violentology” is directly derived from the name of sociologists specializing in Colombian political violence and “manual” is borrowed from the technical vocabulary. The situation in Colombia is not a simple drug war. Ferry, who has collaborated with Colombian specialists, reporters and researchers, takes a comprehensive approach to the conflict, from the density of the texts to the variety of documentary resources, and the way he is able to put the history into perspective.
The introductory timeline traces Colombia’s civil war back to 1810. Since then, the country has witnessed a series of bloody political and social conflicts. The last one, started in 1964 and qualified as “Colombian conflict” because of a lack of consensus, has resulted in the second largest population displacement after Sudan. The timeline finishes at the end of the book, defining the scope of investigation and giving materiality to the longevity of the conflict. The war is complex, involving Marxist guerrillas, far-right paramilitary militia, and government security forces, all dragging the civilian population down with them. It unfolds in a hemorrhage of violence, killings, disappearances – human losses to which respond inexorable material losses – and, very widely, threats. Each parameter of this insoluble equation is approached in a corresponding chapter. The introduction is given over to local reporters, who tell their side of the reality of a conflict that is caricatured beyond the country’s border. A report by the Colombian photographer Jesus Abad Colorado first caught Ferry’s attention in 2000. Ferry later used the archives of the local newspapers to bring himself up to date on the conflict, and the book presents a selection of archival images dating back to the 1950s, one of them printed on the front page. Out of respect for the political commitment of these publications, Ferry combines history and modern-day reality to honor the journalistic tradition in Colombia, and the book was printed on the rotary press of the Bogotá daily, El Espectador. The grainy and soft texture of the 70 grams paper turn the reading of “Violentology” into a visual and tactile experience that requires patience and attention. The sober lay out does not tolerated any distractions that may divert the reader from a serious matter. Ferry recalls the declining power of the papers whose enraged voice was rendered inaudible – a poem by his father subtly touches on this phenomenon. He reanimates photography as the most direct medium and offers an innovative way to reinforce its impact : to share his work with both a local and international audiences, Ferry has put together a book, an exhibition, and free booklets, all of which are alternatives to Internet, ubiquitous but yet elitist.
Painting also plays a key role in the portrait he draws of the Colombian conflict, from communist propaganda posters to anti-establishment artists like Botero, whose painting of a dancing couple inaugurates Ferry’s portfolio. The very last image of a dove painted on a wall, a symbol of peace swirling in an abstract landscape, emphasizes the goal of the author, realistic rather than pessimistic. Ferry spent ten years compiling “Violentology: A Manual of the Colombian Conflict”. At almost 200 pages, the book provides an inside look at the organizations involved in this conflict which, as we learn in the acknowledgments, nearly cost him his life.