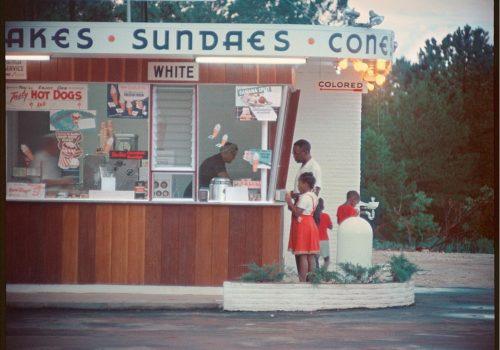 Slavery in the United States officially ended in 1865, after the country’s civil war, but it took another hundred years for significant progress in desegregation to take place in the southern states. Gordon Parks’ Segregation Story captures moments in black lives from just one year in that century-long interregnum between the abolition of slavery and demands for racial justice in the American south.

Three generations experienced life in what was a period of racial stasis between the defining moments that registered the end of slavery and the beginning of the civil rights movement. Each moment was a cardinal point that held out the prospect of transformation and Park’s photographs in Alabama were taken on the cusp of the second of them: 1956, one year after fourteen-year-old Emmett Till was murdered for allegedly whistling at a white woman but also one year after Rosa Parks refused to give up her seat on a public bus to a white man.

The photograph on the front cover – racially demarcated water fountains outside an ice-cream parlour – could easily be mistaken for a scene from apartheid South Africa. While it renders in bright sunlight the darkly obscene underbelly of the American Dream, the book’s contents are not primarily directed to this kind of documentary evidence. Parks’ concern is with family life on the receiving end of the social system that made segregated water fountains a fact of everyday life.

Emerging from pictures depicting the ordinariness of daily life –chatting on a house porch; downtown window shopping (all-white mannequins, of course), filling the freezer, ironing – is a quiet annunciation that a mid-point has been reached, a duration between the end of the beginning and the beginning of the end. It is registered in the steadfast faces of elderly citizens etched with endurance and abidance, and the sense that the only safe anchorage is at home with family. Younger faces hint at impatience with compliance, giving a steely edge to the dignified patience that their parents have had to draw on. The scenes of domestic life and leisure express a state of mind, a time of enforced passivity for black people in Alabama and elsewhere, hemmed in by an arsenal of taboos and Jim Crow laws that contain but do not define them.

The 1950s was a post-war decade of affluence for the readers of Life, the magazine that in their September 1956 issue woke up to the disparity between the comfortable enjoyment of their rights and the denial of them to black people. The twelve-page photo essay for that issue is reproduced at the back of Segregation Story and, while it gives credence to an emerging liberal awareness that compliance with segregation was not to be mistaken for surrender, the photos suffer from being subject to the magazine’s editorial demands. For the purpose of illustrating a text that tells a story, up to four of them could appear, cropped if necessary, on one page and this inevitably diminished their visual quality. The book’s full-page presentation of these and other pictures taken by Parks finally does justice to how, as one of the book’s three essays explains, ‘the spatial and the formal geometry of the picture’ is heightened by the precise framing that Park achieved. His compositions are all the more remarkable when considering that he was using a twin-lens Rolleiflex that required moving the camera while looking down into its glass where a reversed image was visible. Another essay justly draws attention to Parks’ serene use of colour (twenty years before William Eggleston’s use of colour was celebrated at New York’s Museum of Modern Art), ‘belying the strife and hardship of segregation’ but quietly polemical nonetheless. The pictures do not look for or try to provoke an emotional response which, after all, may prove to be superficial and consequently temporary. The political efficacy of manufactured empathy has its limits but these photographs of Alabama life remain resolutely effective in aesthetically announcing that the injustice at the heart of the American way of life.