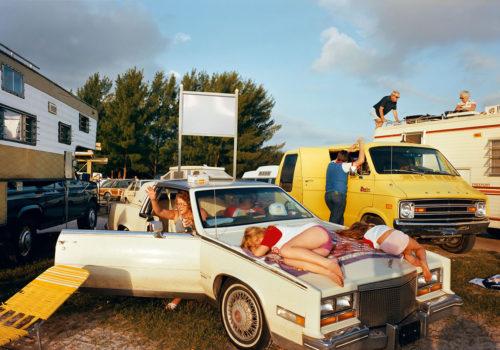 Between the 1970s and ’90s, Mitch Epstein photographed the rituals of pleasure and undercurrent of alienation that defined late twentieth-century America. These pictures marked the beginning of his photographic inquiry into the American psyche and landscape that has now lasted half a century. Recreation captures the vitality of modern America in a pre-smartphone, less self-conscious time. In these early works, Epstein’s wit reigns, along with his singular way of making the mundane startle and the extraordinary appear to perfectly fit in.

This new edition expands on the original Recreation published by Steidl in 2005. More than a third of these photographs have never been published, and all of them have been re-worked with fidelity to the pictorial quality of the films of the era.

“Epstein maps the freakishly mundane landscape of American leisure, from motel swimming pools and airport waiting rooms to state fairs and national parks. There’s a polish to these photos that sometimes seems at odds with their funky subjects… but the dissonance keeps viewers on edge, which, I suspect, is just where Epstein wants us. For all its affection and humor, this is not a comforting picture of Americans at play.” – Vince Aletti, review of Mitch Epstein’s Recreation: American Photographs 1973-1988, Photograph Magazine, 2005.

A pioneer of 1970s art photography, Mitch Epstein has photographed the landscape and psyche of America for half a century. His awards include the Prix Pictet, the Berlin Prize and a Guggenheim Fellowship, and he was recently inducted into the National Academy of Design. Numerous collections hold his work, including the Museum of Modern Art and Tate Modern; in 2013, the Walker Art Center commissioned a theatrical rendition of his “American Power” series. Epstein has described the cultural and physical evolution of the United States from 1973 to 2019 in his Steidl books Family Business (2003), Recreation (2005), American Power (2011), New York Arbor (2013), Rocks and Clouds (2017), Sunshine Hotel (2019), Property Rights (2021) and Silver & Chrome (2022).