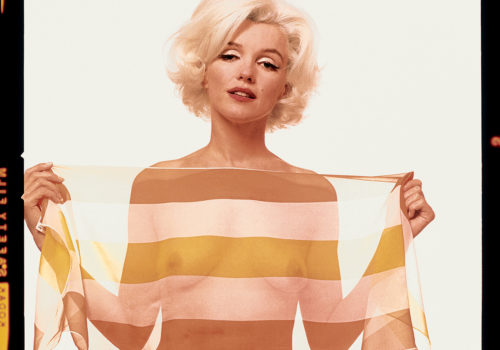 The first time I saw her was at a part for the Actor’s Studio, in New York City. It was 1955. A friend and I had been invited, and when we walked in, there she was: Marilyn Monroe.
She was the center of attention. All the men were around her, and all the light in the room seemed focused on her. Or was the light coming from her? It seemed to be, because she glowed. She had that blonde hair and luminous skin, she wore a gleaming sheath of emerald-green that fit her body like a coat of wet green paint.
“Look at that dress,” I said to my friend. “I hear they sew her into it,” he said.
How would you get her out of it, I wondered, with a razor blade?
I’d laid eyes on Marilyn Monroe only moments before and already ideas about taking her clothes off were going through my mind.
I walked toward her, not with any intention of speaking to her, just in a trance of pure attraction. I had about as much control over myself as a moth flying around a candle. I wasn’t more than three or four feet away when she turned and smiled in my general direction, her dress shooting green stars. I was dazzled. I didn’t question why she would be smiling at me. At that instant I fell under her spell. It was a moment I wanted to go on forever.
I stopped transfixed where I was, on the edge of the crowd. At that time, I was a photographer and a pretty good one at that. Anyway that’s what people told me, and there must have been something to it because I was getting a lot of work in advertising. I took audacious pictures that got people to want things. To illustrate that caption “Driest of the Dry” for Smirnoff Vodka, I had gone all the way to Egypt to photograph a dry martini in front of a pyramid. And I had positioned the shot so that an image of the pyramid appeared upside down in the martini glass. I thought the trip was worth it. And Smirnoff wasn’t hurting either. That year their sales skyrocketed, and that wasn’t so easy for a vodka with a Russian name in the cold war fifties.
For a kid from a medium-poor Brooklyn family, I was on my way. But compared to Marilyn Monroe, I was still nobody. And I was shy. It was easier for me to fly halfway around the world for one ad shot, than to walk up to her and say, “Hi, I’m Bert Stern. I’d like to take your picture.”
It did occur to me that she looked easy to love.
She laughed in the center of her circle of light and men. I stood in the dark, in the shadows, and I watched.
And wanted.
And then I left.
I didn’t dream that I’d ever get any closer to her than I was that night. (…)

Excerpt from Marilyn Monroe : The Last Sitting, 1962
By Bert Stern
Published by William Morrow and Company, 1982