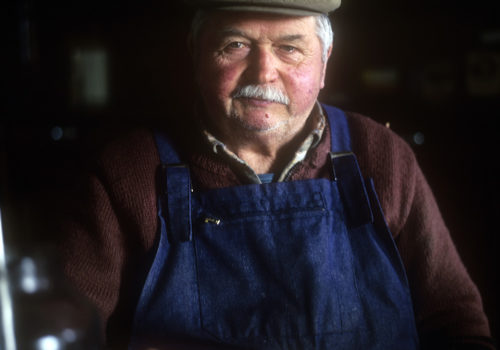 The Fait & Cause Gallery presents the exhibition of the 2 winners of the 10th edition of the SOPHOT competition:

– Padiès, Hier jusqu’au bout, 37 images by Loïc Trujillo, on a town in the Tarn department or the testimony of a rural society that will soon disappear.

These works have never been shown before.

These are the remains of an old farm located in Padiès, a town in the Tarn department, which appear in December during the annual drop in the level of Cérou, a river which constitutes an important water reserve thanks to the dam of Saint- Géraud, built in 1992. We then see through the  pile of fallen rocks what was a wood-fired oven, still in use sixty years ago. It’s easy to imagine the life that animated this place. It was yesterday.

He indicates with a wave of his hand the location bounded by low walls still intact, then, turning his gaze slightly to the right, indicates what remains of the stable.

“One day a clog maker stopped in this house where my parents lived,” he said. I must have been 5 years old, it was right after the war.”

“- Yesterday, we had to walk the paths through the woods to get to school. There were over 100 fireplaces burning in Padiès and the school accommodated up to 70 children. A multitude of craftsmen populated the countryside, wheelwrights, saddlers, carpenters, blacksmiths, farriers, clog makers, coopers … A village was a society.”

Louis now lives a little higher up in La Croix de Cors with his sister. They are the only inhabitants of this place.

Not far from there, in Carrade to be precise, lives Gilbert Nègre, born in 1932, and at a place called Champ d’Albi, hardly further, lives Denise Massol, born in 1938 as well as Jean-Pierre Bouyssie, a “young” neighbor, born in 1967.

All these localities, these hamlets such as Ginals, where Odile Puech and her dog Dick lived some time ago, evoke the same way of life, imprinted with the past.

These are little pieces of the world that bear witness to the end of a world. It was yesterday.

Involved for more than 15 years, he casts an empathetic gaze on people, their lives and their environment. We owe him long-term reportages crowned by several publications and exhibitions.

Sensitive and inspired, their themes include detachment, the working man, children with autism, disadvantaged people, cremation workers in India, the  life in transit of children who are Tibetan refugee.

From 2013 to 2018, he produced a social portrait around the disappearance of a traditional way of life concentrated in several French hamlets in southwestern France.

In 2018, he finalized a report at the Lille University Hospital and SAMU where he followed patients with cardiovascular diseases, a work that is the subject of a traveling exhibition.