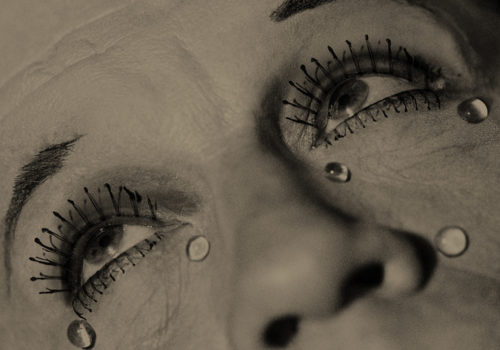 Sandro describes Malkovich as “a beautiful clean canvas ready for paint. He is extremely open-minded, never fearful and always willing to go to places most actors of his caliber would avoid.”

In this project, those “places” Sandro refers to saw Malkovich transform into Marilyn Monroe, John Lennon, Che Guevara, Mick Jagger, Salvador Dali, Andy Warhol, Alfred Hitchcock and other celebrated cultural identities. “His willingness to play dress up and become the subject of some of the most iconic images from history is a true gift from him to me,” says Sandro.

Malkovich and Sandro met in the early 1990s at a photo shoot for the legendary Steppenwolf Theatre Company in Chicago, one of Sandro’s longest standing photography clients. The pair hit it off immediately and since have collaborated on various projects including several award-winning short films. But Malkovich, Malkovich, Malkovich: Homage to Photographic Masters is the most ambitious of all collaborations, and for Sandro “the most important work I have made to date.” For someone as prolific and visionary as Sandro, that is quite a statement and signals the import of this body of work which took a herculean effort from all involved.

In creating Malkovich, Malkovich, Malkovich: Homage to Photographic Masters Sandro brought together an expert crew of stylists, make-up artists, costume and set designers who spent 18 months painstakingly researching each image, analysing the different styles of lighting for each era, the clothes, props, and hair styles. For many of the photographs Sandro “found proof sheets and images that were shot before and after the final image. I needed to have every single bit of detail absolutely perfect. I had a rock star crew. Everyone brought their A-game including John.”

Dorothea Lange’s Migrant Mother is a perfect example of Sandro’s desire to be true to the original image and the lengths to which his team went in fulfilling his vision. In recreating one of the most recognised images from the Great Depression no detail was overlooked. Sandro even sought permission to cut the children’s hair in 1930s style!

The clothing also had to be authentic. “My stylist did deep research and found almost the exact flannel that these children would have been using in that time in history. We had the identical style of shirt made, and the identical dress made for John that the Mother was wearing. We distressed each and every piece to fit the look of what Dorothea Lange captured,” he tells filmmaker Jon Siskel in an interview that also features in the book.

“Some may think it’s all done with the computer. I’m old school, I’ve been doing this for forty years. I use a computer like a darkroom. For the most part it’s all in camera and we’re very, very, very proud that’s how we did it.”

Malkovich calls Sandro “a west-side Chicago version of Zen. Cool, collected, but also enthusiastic and heartily mid-western in his work habits. He’s someone whom I love to collaborate with. He’s impeccably prepared and always gathers a terrific crew.” Malkovich says working with Sandro “is fun, which isn’t always the case with creative people.” Sandro says that Malkovich kept his humour even through the most painstaking aspects like the number of shots it took to get the smoke exactly right to recreate Victor Skrebneski’s 1971 portrait of Bette Davis.

In the pages of this book, the shared vision of these two artists is clearly evident adding to the richness and completeness of the images. As Sandro brings his mastery to creating the image, Malkovich brings his innate ability to channel another’s persona. Immersing himself in the subject’s character, their essence literally radiates through his eyes, which is both exhilarating, and at times, a little nerve-wracking.

The SKIRA book itself is a work of art, clothbound, with silver embossing and trim, and exquisite image reproduction. It is such a delight to see the publisher treat the images with reverence to create what will surely become a collector’s item.

The Malkovich, Malkovich, Malkovich: Homage to Photographic Masters exhibition continues to tour the world. Currently it is on show in Antwerp, Belgium at Gallery Fifty-One until February and at the Magazine delle Idea in Trieste, Italy until May 2021.