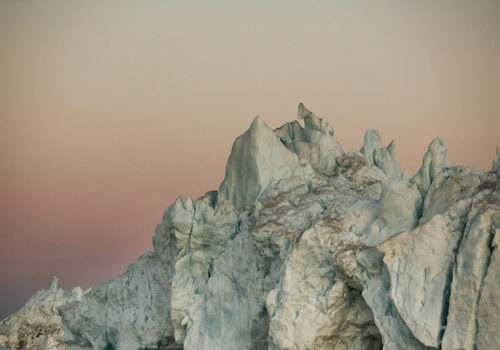 Photographer Simon Harsent says the underlying theme that resonates throughout his personal work “are the paths we choose in life”.  It is this proposition that has influenced his series on icebergs, Melt: Portrait of an Iceberg. While the literal translation can be seen in the pathways these frozen behemoths follow in their physical journey, allegorically it can also be applied to the environmental choices that the human race has taken.

In Melt Harsent captures these glacial giants as they journey down “iceberg alley” from the Ilulissat Icefjord to Greenland’s Disco Bay and on to the east coast of Newfoundland. These icebergs can take years to make a journey that transforms these giants as they are reclaimed by the ocean.

Originally from the UK, Harsent has carved a successful career as a commercial photographer and has been based in New York for the past 17 years. He says the success of his commercial work enables him to self-fund personal projects giving him greater freedom both creatively and in terms of response time. “I don’t want to apply for grants and I don’t want to spend time and energy raising funds. I just want to be able to act on impulses and do it”.

He says Melt was an expensive venture and the longest time he’s spent on a personal project. “I started thinking about what became Melt back in 2005 when I was on a commissioned job in Thailand. I was staying in this hotel and I had a bathtub the size of most people’s living rooms,” he laughs at the memory. “I come from quite a simple background, my father is a poet and we grew up very poor, but at the same time we were very strong in the arts…so when I was a kid we had a tin bath that we used to carry in from outside and Mum would fill it from the washing machine as we didn’t have hot running water in the house. So there I am in Thailand having just flown half way around the world business class to be in this hotel and I am sitting in the bath drinking a beer after the shoot and thinking how the hell did I get here?”

As he relaxed in luxury, and ruminated about his life, he recalled a time as a child when bored and with nothing to do during the school holidays, he decided to do a painting of an iceberg hitting the Titanic. “I am driven by definitive moments and I am very intrigued by at what point that definitive path is taken. At what point can you go back to where you made a decision to do something that had the butterfly effect on everything else that you do for the rest of your life? I can pinpoint Melt to the time when I did that painting…I painted up until I discovered photography when I was about 14. Initially I took pictures of things I wanted to paint and then photography took over…I look back at that moment, the Titanic painting, and kind of think that was pretty much a definitive moment in getting me started on all this”.

Recalling his childhood painting led Harsent to initially consider a project on the Titanic. “But when I started doing research one thing that jumped out was this place called Iceberg Alley. I had these funny visions of icebergs with baseball bats hiding down an alley, clubbing ships in the night and it was then I thought about the dissipation of the iceberg and how this journey was a really good metaphor for my own journey and that’s when I latched onto that idea”.

Over the next three years Harsent developed his concept researching the icebergs and working on the logistics of getting to Newfoundland while juggling commercial work and personal responsibilities. “In 2008 I decided I just had to go and stop trying to find the perfect time. I shot the first part of Melt in Newfoundland spending ten days there. The first day I went out I was like a little kid, to see a real iceberg. We circled it and I didn’t shoot anything for fifteen minutes I was awestruck”.

Returning to New York Harsent quickly realised this was going to be a much bigger project than he had originally envisaged. “I had thought the shoot in Newfoundland would be it, I’d go there a few times….but then I became like an iceberg junkie if you like and I wanted to see bigger and bigger icebergs. That’s when I decided I had to go to Greenland. I had to shoot where they are created and shoot them as they dissipated”.

On reflection he says 2008 probably wasn’t the best year to embark on such an ambitious, costly project. “You know it was tough, we were in the middle of the biggest recession in the world. I was taking a big gamble turning down commercial work, but I had to do this project and it became a huge point for me in my career in terms of finding myself as a photographer, as I’d been so commercially driven to that point”.

“You know the one thing I wanted to do was allow myself to fail, almost. When you do commercial work you structure everything so you can’t fail, but this was a real point of discovery for me as a photographer. I’ve always done personal work and tried to explore the boundaries of what I am capable of as a photographer, but if I am completely honest, that’s always had a slight commercial bent to it because that’s where it ends up, in my commercial portfolio.”

He says his research for Melt led him back to painting and to Mark Rothko’s work in particular. “I had this really strong sense of how I wanted to construct the images in three elements – the sky, the ocean and the iceberg – and to have them act as blocks of colours much in the same way as Rothko’s work does. I shot against a very plain horizon and from the water level. I wanted the icebergs to appear monolithic”.

As Harsent recounts the tale of getting into the speedboat in Greenland at midnight and shooting into the early hours of the morning in the midnight sun you can hear the excitement in his voice. “It was brilliant,” he says. “And dangerous. You do have to be careful and that’s why I wanted to be in a small boat because when an iceberg carves (breaks up or turns over) you can get away quickly and avoid potentially huge waves, which could quite easily capsize your boat”.

He explains that as the icebergs take their journey from the ice fjords the ocean water erodes them from underneath making them top heavy, hence the rolling over. “In some of the pictures you can see deep lines, and grooves through the icebergs. The rain and the wind have sculpted them”.

“I was enamored by the awe of the big ones in Greenland, but there’s this massive fascination in the beauty of the ones that have been weathered down, like how beautiful a pebble on a beach can be. How nature just creates these beautiful, beautiful shapes truly fascinates me,” he concludes.

Melt: Portrait of an Iceberg, which is also an award-winning book, makes its Melbourne premiere in February.