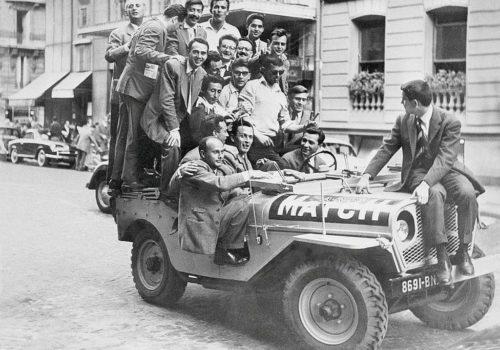 An adventurer of photojournalism from the 1950s

It’s all about meeting. Seeking to record the testimonies of veterans of post-war II photojournalism, I interviewed Russel Melcher, the American founder of an agency called Omnicron who became picture-editor of Magnum Photos Paris. Russ, as his friends call him, talked about an agency I knew nothing about: Telephoto. It was founded by a man named Silvio Galardi. A complete stranger, a curious character…

I didn’t know anything about him. I had not come across his signature in my research on the photo agencies of the 50s and 60s, but his name appeared on this site by mistake on the Vip Press agency file. One fine morning, I received a message from one of his grandchildren. Adriano was trying to get informations about his grandfather  that he did not know, and suddenly relaunches my research on Telephoto and Silvio Galardi.

Sylvère Victor Galardi was born in Marseilles on July 16, 1921, he is better known, if one can say so, under the name of Silvio Galardi; but, over the days of investigation, I discovered that he also signed Sylvaire or Sylvere, and sometimes shortened his surname to Galar, without “i”. In Marseille, he had a good friend, Etienne Leandri, who will become more famous than him, especially in the press and the courts, about the affairs of Charles Pasqua.

When the Second World War broke out, Silvio Galardi was 19 years old. He seemed to embrace the cause of resistance to fascism since he appears in the registers as having belonged to the French Fighting Forces (FFC), the Deportees and Internees of the Resistance (DIR), and the Free French Forces (FFL). He was reportedly arrested by the Gestapo and deported to Austria as part of Operation Meerschaum, leaving Compiègne on April 20, 1943. 997 men in this convoy destined for the Mauthausen camp (Matricule 28063) where they arrived two days later . Silvio was then detained in the Gross-Rosen, Flossenbürg and then Leitmeritz camps. He was released on May 20, 1945 in Longuyon.

In this same convoy of deportees of April 20, 1943, there was André Lacaze (Matricule 28214) and at the Gross-Rosen camp, Yves Le Tac. The Le Tac family included several members involved in the resistance to Nazism, including Yvonne Le Tac and her children. “Joël Le Tac with his brother, Yves Le Tac rallied, very young, the General de Gaulle, and they organized the Overcloud mission, during the Second World War, which consisted, in addition to establishing contacts between London and the groups of resistance fighters, including railway workers, in Brittany to set up a device ensuring, thanks to fast gunboats, a safe return link between France and England…/…During the 1970s, Yves Le Tac  campaigned for the left-wing Gaullists, alongside Maurice Clavel and Solange Troisier, and he took over the presidency of the League for the Dignity of the Child association. »

“According to a report of the DST, Silvio Galardi would have collaborated with the Gestapo in the search for Jewish property”, but it is perhaps a matter of confusion with his “father [who] would have belonged before the war to the national club of  Darquier de Pellepoix pro-Nazi and anti-Semitic, director of the newspaper La France Enchainée”.

The war had upset mentalities, stirred men… Is Silvio Galardi still friend with Etienne Leandri? We don’t know, but in May 1948 he was sent to Frankfurt-am-Main by Les Actualités Françaises (cinematographic news) where he was arrested on September 26, 1948 while trying to get 13,000 dollars worth of counterfeit money. He was sentenced to five years in prison.

On his return to Paris, he contacted André Lacaze, Yves and Joël Le Tac whom he had known in deportation. Joël Le Tac and André Lacaze now worked for Paris Match. He will start to freelance as a photographer for the weekly. On July 14, 1951, he was nearly lynched by a crowd outraged by the launching of a smoke bomb at a demonstration bringing together far-left parties including the PCF. Wounded, he was taken to the hospital and he was exonerated by the testimonies of his colleagues from France-Soir and Paris Match. But, on September 13, 1951, he was denounced along with his friend Joël Le Tac for having participated in anti-communist attacks. In fact, there were numerous attacks that summer against communist bookstores and even against the daily newspaper Le Patriote in Nice….

After the war, “He was a little lost, tired and he frequently came to Brittany to our family home, that’s where I met him” remembers the writer Monique Le Tac (daughter of Yves Le Tac ) who became his wife and with whom he had two children. But, she adds, “I know little of his life, because he considered that there were men’s stories from which women were excluded. I know that he stayed in the United States where he was a correspondent for French newspapers and perhaps also for the CIA… I also know that he worked in a nightclub run by a certain Noëlle Duval (? ) for a few months … “. Photographer Russel Melcher confirms that Silvio Galardi was very friendly with several owners of Parisian nightclubs, perhaps thanks to the contacts of his friend Etienne Leandri who was a famous gigolo before and during the war.

Silvio Galardi then began a career as a photographer mainly for Paris Match, where André Lacaze became head of information. In 1953, General de Gaulle was no longer in power, he started on a tour of Africa, hoping to restore his image. He was somewhat forgotten by the “ungrateful nation”. Jacques Foccart organized the trip. De Gaulle did not want journalists but Olivier Guichard told him that witnesses are absolutely necessary and recruited Joël Le Tac and Silvio Galardi to cover for Paris Match his visit to the Negus of Ethiopia.

In January and February 1954, Sylvère Galar, Jean Mézerette, Walter Carone and Jean Mangeot were Paris Match‘s special envoys to cover the Berlin Conference, a meeting of the Council of Foreign Ministers of the United States, Great Britain, of France and the Soviet Union. They also took the opportunity to report on the city cut in two by the iron curtain. For Paris Match, still, he covered with Michel Descamps, Izis, Maurice Jarnoux and Pierre Vals the earthquake of September 9, 1954 in Orléansville in Algeria.

On October 9, 1954, the last elements of the French expeditionary force left Hanoi after the defeat of Diên Biên Phu. Sylvère Galar and René Vital covered the departure of the troops for Paris Match. On October 19, 1955, with Russel Melcher and Claude Azoulay, they covered the mythical concert of Sidney Bechet at the Olympia. The concert was free and more than 5000 people jostled on the boulevard des Capucines in Paris. The concert turned into a riot with dozens injured and hundreds of seats broken

“Very anti-communist”, Silvio Galardi joined the Rassemblement du peuple français (RPF) with Joël Le Tac, a French political party, created by Charles de Gaulle in 1947 and put to sleep in 1955. At the beginning of the 50s, probably in 1955 , the precise date is unknown, Galardi left Paris Match to create the Telephoto agency at 6 or 7 avenue Georges V in Paris. No legal traces…

Monique Le Tac, who “worked a bit at the agency for foreign sales, places it at number 6 on the avenue, while the photographer Claude Azoulay places it at 7… But both remember a scoop , a photo of the embalmed heads of Lenin and Stalin, taken by an amateur. At the time, visas for the Soviet Union were rare. Russel Melcher who had left the Omicron Photos agency for Telephoto “because Silvio Galardi was excellent at selling photos to Paris Match or Noir & Blanc …/… Lenin and Stalin, this photo was unique and had been published several times in Paris Match, Life; it was made by a mathematician to whom we had explained how to take a picture. »

In July 1957, Silvio Galardi entrusted the agency to his sister Paule Galardi (1922-2008), then, according to Russel Melcher, he sold it to a fashion photographer. But according to Monique Le Tac, Galardi sold the agency in 1959 to Jacqueline Moreau, the first wife of journalist Jacques Chancel. “We then left for Italy, because Silvio had learned that the pope authorized slot machines in cafes (?)…. He bought some and sold in many bars… He was very good friends with Etienne Leandri… Silvio was a strange and secret character. He never paid taxes, he said: I was deported, I paid enough. He was also very nice, he got me into the ORTF. But all these affairs seemed a bit murky to me and I left him in 1964. Afterwards, I don’t really know what he did. I know that he created the first television news in Spain and then he no longer worked in the news business. It is possible that he participated in the launch of the first Spanish television program magazine Telediario, which became Tele-Radio (1958-1986).

Sylvère Galardi and Etienne Leandri had known each other since their youth in Marseille. When, in 1957, Sylvère Galardi left for Italy, Etienne Leandri took refuge there to escape his sentence to 20 years of forced labor for colluding with the enemy. In his book Mafias, Judge Gilbert Thiel wrote that having been the intermediary between Lucky Luciano and the CIA allowed Leandri “to begin a new career, that of intermediary in arms sales and in the negotiation of lucrative oil contracts. He was involved with Charles Pasqua in many cases of occult commissions.

No traces of Silvio Galardi then except his participation as administrator, in the company of Etienne Leandri, in the company Sanfit SA, a company manufacturing and selling sanitary ware headed by René Chevrier. The company created in 1968 was closed on September 15, 1985.