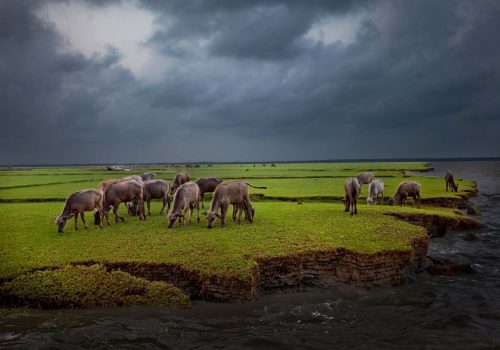 I regard My Journey as a Witness by Shahidul Alam as the most remarkable book by a single photographer since a messenger brought me a first copy of The Decisive Moment by Henri Cartier-Bresson in 1952. It is not that the two books should be compared, although they are approximately the same weight.

If Shahidul’s book becomes as influential as has Cartier-Bresson’s, it will be for an entirely different reason. For me The Decisive Moment was the book that first articulated the philosophy of photojournalism. It was also notable in that it gave equal play to photographs of East and West. Its images have stood the test of time.

My Journey as a Witness is entirely different. It is an angry book, deliberately provocative. It too has many beautiful, meaningful images, but it is a book that must be read. It is a book that will break your heart.

Shahidul Alam was educated in the West, but he is a man of the East. As a teenager he witnessed the war that gave birth to his country, Bangladesh, in 1971. This book is a kind of diary of his career, which began briefly in London but now embraces the world.
His passion is to show ordinary people as they truly live and work, not as they are seen by what he calls the “dominant cultures” of the West.

Alam thinks most people in the world are being short-changed. He thinks photojournalists can do something about that. To assist them he has created an agency called Drik (Vision) in Bangladesh; a website, banglarights.com; and a brand, MajorityWorld.com. He also founded Pathshala, the first South Asian school of photography, which sponsors biennial international meetings, à la Perpignan.

Alam’s ambition is not only to transform photography but to transform the world. He passionately argues for true world government, government by the majority of all peoples, not just dominance of the superpowers

I happen to agree with much if not most of what he says. Read the book and decide for yourself.