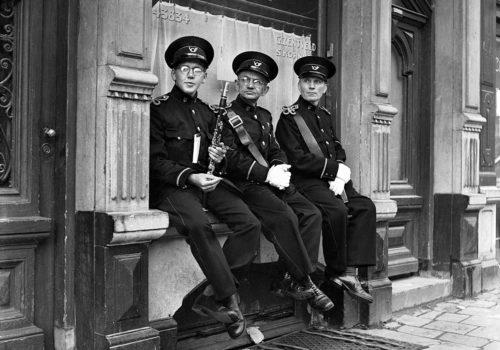 “Walk into any Amsterdam bookshop and you can find a shelf of studies on the German occupation. As you leaf through the photographs, one particular black and white snapshot springs from the page: a frail, sad-faced boy clutching a saucepan as he walks through the streets of the hunger-stricken Dutch capital in search of food. Composed with geometric shapes and stark use of light and shade, Boy with a Pan combines aesthetic rigour with poetic power. Endlessly reproduced, the photograph has become emblematic of civilian suffering during the Second World War. Yet these days little is known about Emmy Andriesse, the photographer who captured the image in early 1945, during Amsterdam’s infamous Hunger Winter.” — Louise Baring.

In tumultuous years between 1940 and 1960 many photographers and artists produced powerful and important work. Emmy Andriesse secretly documented the Nazi occupation in 1944-1945. As a Jewish woman, she had to forge Aryan identity papers first to then hide her camera inside the shopping bag and capture the daily struggle for survival of men, women and children in the streets of Amsterdam.

“Louise Baring, a British journalist and author, has selected about 100 of Andriesse’s 14,000 negatives and contact sheets and written a brief biography to accompany them. Despite her short career, Andriesse’s photos show her joy and perception in subjects from high-fashion models to portraits of artists to simple everyday scenes as well as a documentary legacy of the German occupation.”
Jewish Book Council

Emmy Andriesse (1914 – 1953) is one of the most important 20th Century women photographers, best known for her unforgettable portrayal of Amsterdam’s Hunger Winter of 1944 – 1945, now emblematic of civilian suffering during the Second World War. Andriesse was born into a liberal Dutch Jewish family. She was trained at the Royal Academy of Art in the Hague under the aegis of Gerrit Kiljan and Paul Schuitema, who pioneered the “New Photography”, based on Bauhaus principles – as well as encouraging students to experiment with its role as a documentary medium.

Her rigorous yet sensitive approach enabled her to produce images of unusual poetic power, whilst her versatile fashion, documentary, portrait and landscape photographs reveal her curiosity about her fellow human beings and sense of beauty in the world around her.

Louise Baring has contributed to The Economist, Vogue, The Daily Telegraph and The Independent on Sunday. She is the author of the acclaimed books Martine Franck (2007) and Norman Parkinson: A Very British Glamour (2009). She lives and works in London.