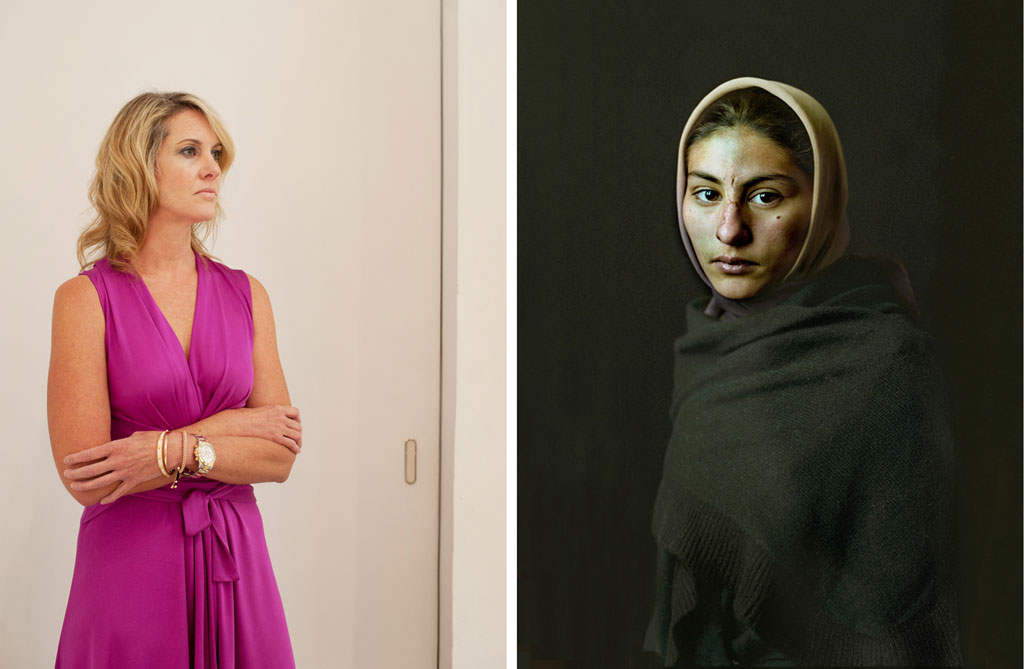 Sarah isn’t the sort of woman you forget. She’s like a lioness, wearing her ambition on her sleeve. She has a huge love for photography and, it seems, real guts.

She welcomes me into one of the four rooms of her enormous gallery on 24th Street in Chelsea. Two chairs have been brought in, placed underneath Pierre Gonnord’s unflinching portrait of Konstantina. Around us the gallery is alive, breathing, moving about….
“Sarah, what was your first experience with photography ? The very first ?”
“Oh, well, that’s easy….”

Rising from the chair an hour later, I have that numb feeling you get after seeing a great film. Sarah’s words are still resonating in my head while I’m taking her photo: “Creating challenges, daring, taking risks, having the courage, staying active, constantly looking for new artists, knowing your goals….”

I feel as if I’m leaving a class on the business of photography – the most interesting one I’ve ever been invited to attend. Here’s my favorite lesson:

In 2006, Sarah discovered the artist Pierre Gonnord during Paris Photo. Right away she falls in love with his unusual portraits. She starts talking to Juana de Aizpuru, the Spanish dealer who represents him, and proposes that they collaborate. Sarah tells me with a smile how Juana (a fantastic woman and a fantastic dealer, she adds) thanked her for coming to see her, with no other response than a simple “It was nice meeting with you.”

So Sarah goes back the next year. Again, “It’s lovely to see you.” And then the year after that, this time with her niece in tow. “It’s terrific to see you, and your niece is lovely.”

Sarah isn’t the sort of person to take no for an answer, she tells me. So she exercised patience, respectful determination, will, humor, and other delicate strategies for six years – six whole years ! – before opening her Pierre Gonnord exhibition in December 2011. And now she is his exclusive American representative.

I love this story.

From her first encounter with photography to the opening of her gallery…
To complete her undergraduate bachelor of fine arts degree (majoring in painting) in a small college in Santa Fe – Sarah had to take photography classes. She chose David Scheinbaum’s 101-photography class where she learnt to make a pinhole camera out of an oatmeal box. When she put it in the developer, she knew that her life was changing.
She shifted form painting to photography and got her degree. At the time she was already working for an art collector, doing an internship in a gallery and silver printing for photographer Joan Myers.
She was a photographer for 4 years and then says she simultaneously ran out of things to say artistically and began deeply enjoying working with other artists. She easily admitted that she was probably a better business person than a creative in the art world. She decided that she wanted to follow her ambitions and move from Santa Fe to New York. After one year of training on a mjor gallery, she was hungry for more autonomy and decided to join a colleague who was opening a photography department in a gallery. She worked with him for 10 years until they were asked to become partners and take over the gallery. Hasted Hunt was born in 2005 – “Terrific, intimidating, terrifying and thrilling all at the same time” adds Sarah.
In 2008, a huge and prime location gallery space becomes available in the heart of Chelsea. Even though Hasted Hunt was a young gallery, Sarah decides to try the challenge and convinced the landlord to take a risk on her. She got the space in 2009 and decided to continue her business with long time co-worker Joe Krautler. Hasted Kraeutler was born.

Her best memory as a gallerist…
Sarah remembers the enthusiasm and support that the community showed when she opened her first gallery in 2005. She talks about the very special moment of seeing her name put on the door. She realized then that she didn’t know it was a dream but it happened and she followed it. And then it became a dream come true. And she still feels it everyday when she walks in.

Her worst memory as a gallerist…
She says the disintegration of her partnership with her former partner and what people decided to say about it was very sad.

A photograph that has a special importance in her life…
Konstantina by Pierre Gonnord.
Sarah says Konstantina seems strong and yet vulnerable – one of these women who show a tragedy to them that Sarah says she is magnetically attracted to.

On her bedroom wall…
A painting of a monk clouded in sunshine by Junsik Shin
A painted portrait of her sister done by her mother
A painting of stars by Adam Strauss
In the rest of the apartment is Richard Misrach’s woman looking at the beach, Gregory Crewdson’s empty car, Helen Levitt’s little girl crying, one of Lee friedlander’s Topless Bridesmaid from 1966 and one of Vik muniz’ Mr. Rogers (From Picture of Ink).

If you were a famous artist, who would you be?
Cindy Sherman – because “She has had an unbelievable remarkable long career. She is a strong woman without being tough, she is lovely, girly at the same time, consistent artistically, vulnerable and works really hard.”