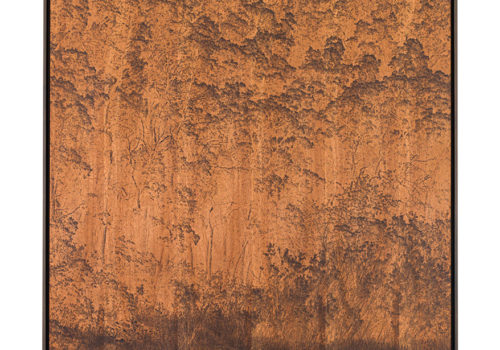 Ryan Lee presents Clifford Ross: Prints on Wood, an exhibition of new photo-based images in which the artist pursues his long-standing interest in capturing the sublime in nature by printing on hand-selected maple veneer. These include stark black and white negatives of details taken from his high-resolution color photographs of Mount Sopris, as well as dramatic crops of his black and white hurricane wave photographs. The altered images, in combination with the varied color and texture of the wood as a substrate, add drama and a distinctly non- photographic quality to Ross’s compositions, pushing his work toward the realms of drawing and painting, a return of sorts to his original media.

“I’ve been missing the materiality of paint and canvas and found this mix of imagery and materials propelled my photography into an unexplored place,” Ross explains. “I was constantly surprised by what I was seeing in the studio. Who doesn’t want to see and experience something new? The new awakes us from our normal state… Nature was appearing before me in an oblique way—like a dream, by suggestion not by declaration. The wood surface foils the transformed imagery, engaging us to decipher anew what we think we know.”

An interest that began as a vision for large-scale wooden frescos at a public building in Texas, Ross found himself pushing hard at the existing boundaries of photography to establish his process with wood—so much so that he even has trouble referring to these works as photographs. Instead, for him they have become “wood prints or prints on wood.”

On view at the gallery are unique single wood panel prints made during the last several years. These new works explore isolated details of earlier, monumentally scaled works that range up to an astounding 26 x 114’. Each new work is unique, a singular exploration of image and veneer, utilizing an innovative technique of digital printing.

In his pursuit of nature’s beauty and the sublime, whether through realism or abstraction, Ross is perpetually at the forefront of the various media with which he has worked. In 2003, he invented one of the highest resolution film cameras in the world. His recent Digital Waves combined advanced computer animation with a new use of LED panels to capture the dramatic movement of ocean waves.

By succumbing to the unfathomable complexity and beauty of nature—from the chaos of a hurricane’s effect on the ocean to the overwhelming mass of details that make up a simple but grand mountain scene—Ross creates works that are, from their subject to their medium, in complete devotion to nature’s wonder. In his manipulation of his subjects and his medium, Ross communicates to the viewer his sense of immense awe of the natural world’s inherent power.

Ross’s wood prints have been included in solo exhibitions at the Parrish Art Museum, the Boca Raton Museum of Arts, and MASS MoCA. They will also be featured in his next museum exhibit, Clifford Ross: Sightlines, opening at the Portland Museum of Art in October 2021.

Clifford Ross (b. 1952 New York, NY) is a photographer and multimedia artist perpetually on the forefront of inventing and reinventing both traditional and new media. Ross began his well-known Hurricane series in 1996, marking a shift in his practice towards keenly observing the forms and movements of water. He captured striking ocean waves by wading into the surf— while tethered to shore—during severe storms on the East Coast. The resulting black and white photographs translate the power and dynamism of waves into still images, their hyperrealism nearly rendering nature abstract.

In 2015, MASS MoCA presented Landscape Seen & Imagined, a mid-career survey of Ross’s large-scale photography and Digital Waves along with the publication of two fully illustrated companion volumes, Hurricane Waves and Seen and Imagined. In 2017, Parrish Art Museum on Long Island presented Light | Waves, a solo exhibition of Ross’s Wood Waves and Digital Waves. This was the first time that the museum allowed an artist to utilize their highway-facing facade, an occasion for which Ross made two 100 foot long Digital Wave LED walls. Ross was also included in New Territory: Landscape Photography Today at the Denver Art Museum in 2018, and will be included in two upcoming exhibitions at the Boca Raton Museum of Art in the fall of 2019 and the I.M. Pei designed Portland Museum of Art in Maine in 2020.