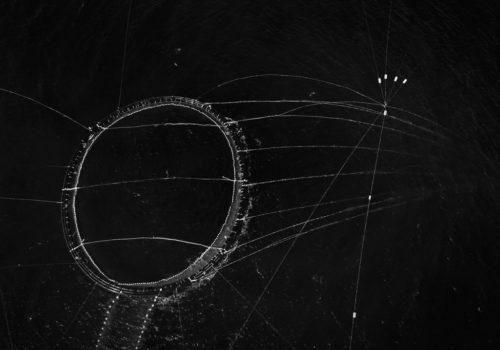 Let’s think about a seventeenth-century frescoed palace in Rome in conjunction with something very similar to constellations. That is an interesting contrasting harmony between the 22 large format photographs by Francesco Zizola, composing the exhibition Mare Omnis, and the ancient halls of Palazzo Borghese in Rome where they are on stage at the Galleria terrena, the Galleria del Cembalo.

Shining spots and essential lines against a black background draw shapes difficult to interpret. Indeed, they are tuna fishing gears in the open sea, photographed with a drone by Francesco Zizola, who, in this work, differs strongly from the images he is well-known for. Indeed, he has been documenting for more than thirty years the main crisis and conflicts in the world, winning, for instance, 10 World Press Photo and 6 Picture of the Year International.

The photos on show are significant shapes, let’s say artistic signifiers, that mark the beginning of tuna fishing. It’s a type of fishery that is also rite and heritage and the gears installed by the tonnarotti – who take care of the slaughter – are the ones they use to catch the tuna in their migration.

Shot at the Tonnara di Portoscuso, in Sardinia, the pictures are composed of lines (the points are buoys and the threads are the tops that secure the floating parts of the gears to the seabed. They are fluid geometries with a touch of randomness (currents, wind and waves, the drone’s position, do not allow the immobility of the subject, confirming so the uniqueness of each image).

Zizola records this ancient traditional fishing system in quite a different way. No human presence in these pictures by Zizola (unlike his photoreportages), nor the tragic agitation of the tuna slaughter. In Mare Omnis, there’s just silence, though telling about the relationship between man and nature. A relationship that turns into black and white abstraction. So, the viewer can get lost in a kind of perceptive disorientation. The series’ name Constellation, for instance, is one of the means used by the author to try to divert the senses. As Francesco Zizola says about the meaning of this work: “It is mysterious and elusive and can only be achieved through imagination and stylization. Photography has the task of opening new possible understandings of the complexity of reality”.

The images seem to represent stars blinking in the sky, though they are large tuna fisheries: (they are things that stand for something else). They are the many layers of meaning that make up a photographic image, including the subject itself, what we observe, and what we reconstruct with our visual approach, by assonance and references.

“I find it more interesting to use photography to lead our perception and our mind to an imaginative and symbolic dimension, able to proceed by narrative metaphors. And the storytelling according to me is about the meaning of our being and of our action”, Zizola explains.