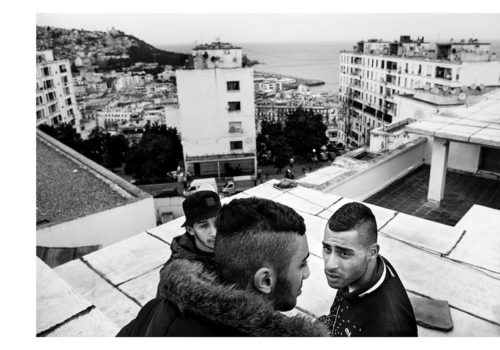 Kho is the immersion of the photographer Romain Laurendeau in the heart of the popular districts of Algiers, to meet the  young people who, one day in February 2019, broke the wall of fear by surging into the streets, thus giving birth to the  major events that Algeria had known in decades.

When Romain Laurendeau discovered Algiers in 2014, Bouteflika was hard pressed to be elected president of Algeria for the 4th time, a country with a very heavy past and ultimately very little documented since the “black decade”, the civil war of the 90s. The photographer was immediately caught by the general slump. At every street corner, large numbers of young people seemed to wander aimlessly, in the void … The regime expecting nothing from them other than calm, resignation.

He then decided to tell the story of these young people who were of no interest to anyone.

Romain Laurendeau followed their wanderings, photographing everyday life in its simplicity. Suspended moments which only underline a singular and worrying situation. The boredom and frustration of the streets. The vengeful rage of the stadiums. Moments of ephemeral freedom in discreet places, hidden from society …

He lived with these young people for more than 5 years, as if inhabited by this story which for him went beyond a simple documentary.

Something fundamental and universal was being played out in these neighborhoods, which had to do with human tragedy.

Man facing the dogmas that gnaws at him? how does he live when deprived of his dream?

Kho shows and questions the genesis of a revolt.

Romain Laurendeau is a French photographer. After a deug in physics and chemistry then training in photography, Romain contracted keratoconus, a disease that gradually deformed his corneas. During these sick years, he explored intimacy, through introspective series fueled by his doubts. In 2009, a cornea transplant saved his sight. This rebirth spontaneously led him elsewhere, a journey, to document the human condition in all its aspects.

In a perpetual questioning of people and the world, he naturally developed an immersive approach by sharing for months the daily life of the people he followed. First in Senegal, but especially in Algeria, he was directly confronted with the suffering of a population subjected to issues that are far beyond their control. In his quest for universality, absurdity and the consequences of dogma became his favorite subjects.

The photographs that make up Kho have won numerous international awards.

Winner of the Pierre and Alexandra Boulat Prize 2017

Winner of the Roger Pic Prize 2017

Winner of the 2015 Camille Lepage Prize

More information and pre-orders on: https://romainlaurendeau.fr/