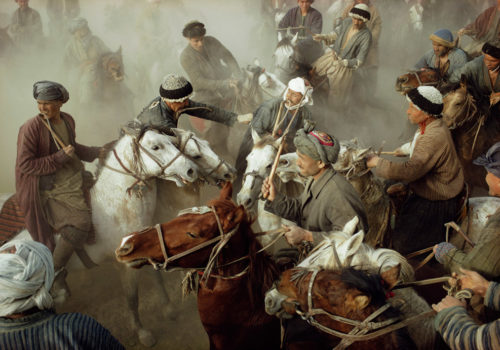 There once was a man who loved a woman so much he could not be without her. The man, a French photographer named Roland Michaud met a Moroccan born girl called Sabrina in the late 1950’s. They began their life together traveling through the mystic lands of the Orient discovering and documenting its wonders. They made their way by car and by horseback, by boat and on foot; crossing the dramatic landscape of the Orient and documenting its rugged charms. From ruined cities covered with desert sands to the Pamir Mountains, where caravans of camels walk across frozen rivers in winter, to the Turkestan bazaars along the old Silk Road, Roland and Sabrina travelled and came to love this exotic paradise and its proud peoples.

In 1960, the couple began  a photographic journey in their Citroen car to Ethiopia and North Africa where they acquired their first images later published in the French press.

In 1964, inspired by literary works like The Arabian Nights and Sufis tales, Indian epics and the writings of Chinese poets, the Michauds embarked on a 4 year journey from Paris to Singapore, taking photographs that revealed to the western world previously unknown countries which included Afghanistan, Uzbekistan and the land of the Kurds. On their return to Paris, they published their first photographic book.

During the winter of 1970-1971, this time on horseback, they found themselves in the region of Pamir, Afghanistan where the couple joined a caravan of Kyrgyz herding camels. They documented the lives of Pashtuns, Tadjiks, Hazara farmers, Uzbeck horsemen, Nuristani mountain dwellers and Dervish vagrants.

Now in their 70’s and 80’s they are still travelling to the Middle East and Asia and are faithful to their old Leica “Argentic” camera.

Their motto: Old age is winter for the ignorant, but harvest for the wise.