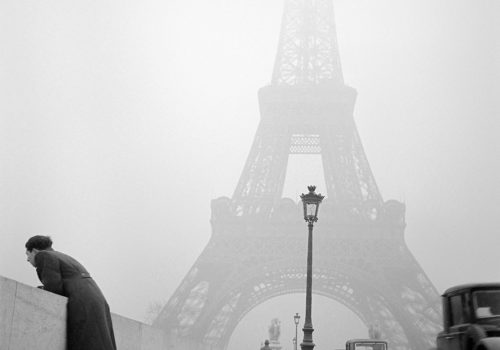 Roger Schall was a drummer in a Jazz orchestra. Photography ? He learned with his father Émile Schall, a photographer in Paris and Les Sables d’Olonne. In 1929, he sold his battery to buy a revolutionary camera, the Leica with a new 24×36 format. With it, he travelled around France and came back with more than 5000 photos. He found what he was made for and created Studio Schall in 1931…

The 1930s were a pivotal period for photography, which moved from the stage of simple document to that of creation. The photographers were experimenting with other shooting angles, foreshortening effects, unusual perspectives and introducing a new relationship to the subject. All of this was made possible by technical progress and the appearance in 1925 of the Leica, then in 1929 of the Rolleiflex.

Roger Schall was above all a photoreporter, which allowed him both to be independent and to satisfy his immense curiosity. He documented with passion for more than twenty years the war, political demonstrations, work, leisure or fashion in French society. From the beginning of the 1930s, he covered several international and spectacular events such as: the Nuremberg Congress, the Radical Congress of Marseilles or the maiden voyage of the ocean liner Normandy.

In 1934, Michel de Brunhoff introduced him to the world of fashion and Parisian high society. He then became a society photographer, produced numerous portfolios for Vogue, he photographed Coco Chanel and the celebrities of the time. But unlike most of his colleagues, he placed his models in their privacy or outdoors and sought spontaneity.

The strength of Roger Schall’s images comes from the alliance between the dynamism of the framing, the high technical quality of his shots and the romantic nostalgia of a world that was about to disappear. He always looked at reality with respect, kindness and tenderness.

At the end of the war, Roger Schall gradually abandoned international reporting to devote himself to advertising orders and industrial reportages. This era marks the end of a period of intense creativity that began in the 1920s. He gave up photography in 1967 and devoted himself to painting and managing his archives, which included nearly 100,000 images.

Built with his son Jean-Frédéric, this exhibition presents some forty masterpieces taken in the 1930s. The silver prints are made by Thomas Consani of the PICTO laboratory.

“One year after the closing of the ARGENTIC gallery, I am happy to be able to invite you to the exhibition of Roger Schall’s masterpieces as part of the Vincennes Images Festival. I will have great pleasure in meeting you, from Tuesday May 17th to Sunday May 22nd, in the large hall on the 1st floor of the town hall of Vincennes, this superb building which is as old as Roger Schall first photographs…! »