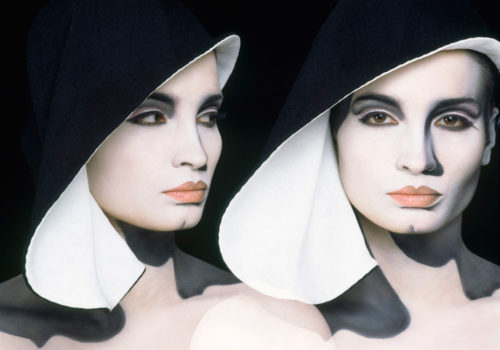 In the 1980s Australian-born photographer Robyn Beeche turned her lens on the “gender-bending” world of counter-culture in London collaborating with the likes of Zandra Rhodes, Vivienne Westwood and Divine. Her groundbreaking images, many of which look like digital manipulations, were all shot in-camera on film, and executed through collaboration with make-up artists, designers and models.

For 30 years these photographs lay untouched as Beeche found inspiration photographing rituals in India, where she now spends half the year living in an Ashram community. Now they are on show in Sydney, reproduced in large format for the first time thanks to the vision of Black Eye Gallery owner Tom Evangelidis who encouraged Beeche to show her work on a grander scale.

Beeche says revisiting these images “ it is like greeting old friends again. It’s really lovely to go through this body of work that was created over ten years. And it’s important too I think because the work I was doing then was pre-computer and pre-Photoshop”.

She continues. “Nothing is collage, nothing is retouched it is all done in the camera. I used a lot of tricks, like a plate of glass between the subject and myself. Double and triple exposing were other techniques. My whole love is to share the work, to inspire the young people of today to collaborate and whenever I am showing I love to talk with people and to talk them through the images and how they were made”.

Beeche says her intention for this collection, which was produced “for fun”, was to be “universally accepted and timeless…and to see the work again, they remain as fresh as they did when I shot them”.

In London in the 1980s everyone was pushing creative boundaries in music, theatre, fashion and visual arts. Here Beeche found a likeminded group of artists to collaborate with and with whom to unleash her creative spirit.

“When I cast my mind back to those days we were all in the same boat. Most of us were just beginning…everybody needed photographs and often we did contra deals. We just bounced off each other and couldn’t wait for the weekend when we could organize a shoot, experiment and have fun.”

In this collaborative environment each artist helped the other as Beeche explains. “A lot of the models I used wanted to get ahead. Hairdressers weren’t as renowned as they are today, the make-up artists needed pictures for their portfolios, and so everybody was given a picture. So these shoots serviced all of us”.

“I used to say to people leave your ego at the door and let’s just have fun. Say what you think, let’s try your way, let’s try my way, his way, so I think that was why we had such a good time. We covered people with earth, gold leaf and other uncomfortable substances like superglue on the nails – that was one of Australian make-up artist Richard Sharah’s tricks. We would always bounce from one session to the next and even though we didn’t have a lot of money, and were all struggling to pay the rent, we’d pool our funds.”

As Beeche’s reputation grew she began to shoot for the likes of Zandra Rhodes who commissioned Beeche to create posters for her fashion shows that were always held at midnight. The posters were signed and used as invitations for those lucky enough to be on Rhodes exclusive guest list. These posters also drew others to Beeche such as make-up artist Phyllis Cohen and body-painting artist Richard Sharples, both of whom worked with Beeche during this period.

“We were doing portraits where people’s heads were sliced off at the top, or their neck would have a gap in it. In another there is a pole through the subject’s torso. I shot against black velvet because it absorbed the light…We wanted to make people stop and look.”

Beeche continues. “The clever thing about Richard Sharples work is the way he creates the depth and perspective to the make-up and really anything you can do on canvas you can do on skin.” To illustrate her point she shows me a photograph entitled ‘Torn Mask’. “When you are looking at this torn mask, the black in the centre has taken out half of her nose, and it’s the depth of the shadow on the paper pieces, which are so clever. The illusion is carried off because of the way Richard could juxtapose the pigment”.

All of her work from this period was shot on film and nothing altered once the shutter was pressed. Beeche says film is still her first love. “Shooting on film is a very different approach, experience and end result to digital photography and while I shoot digital for the archive work I am doing in India, I still shoot on film for myself”.

“My life has been a lot of green traffic lights,” she says of the opportunities that have come her way. “I learned by others sharing their knowledge with me, I never had any formal training and that’s why I am happy to share my experiences. I loved breaking all the rules really and still do.”