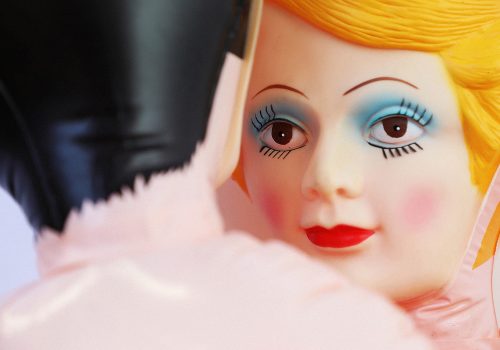 Robert Lang releases “Idolatry”, the 30 page photo book features the fine-art photography of body form portraiture capturing the intimacy of Judy and John and  the beauty of the anatomy of the plastic blow up doll figure in 22 images. The new book portrays the bonding and intimacy between Judy and John concluding her journey in self-portraits.

‘Idolatry’ is the follow up photo book to ‘The Emancipation of Judy’  released in 2017 that documented Judy’s self-portraits in diary form depicting her in intimate and a vulnerable state as the subject of self-awareness is questioned.

The subject covers vulnerability between two objects and photographing silhouettes abstracted into sculpture to portray the declaration of love.

Judy has only ever been known as a blow-up sex-doll. She is the epitome of the anti-feminist object, but, as photographed by Lang, -brings a bittersweet and humanized side to the sex industry that is rarely shown.

“The Emancipation of Judy” portrayed who Judy is and who she wants to be as she was stripped of this choice when she was created. Judy has only ever been treated as a sexualized possession and like anyone else feels to need to be desired but was made to be your sexual fantasy and a product of capitalism.

The result of Judy’s journey was a 21 colour images photographed in Los Angeles including collages of herself over dreamy landscapes manifesting a need to escape and explore. It Featured in Metal, American Chordata Issue 7, After Nyne Magazine Issue 15 and other select publications.

“What is the colour of love? As all I felt was blue before you.” – Judy

‘On creating “Idolatry”, the follow up series of Judy, I wanted to conclude her story to have a happy ending. The final result is a book mixing body form not in a sexual way but more the affection between two subjects. Keeping to the concept with the idea that they were both a living being and how interesting it would be to photograph her from her own perspective. The theme of existentialism, choice, feminism and freedom played a large role in the original concept “The Emancipation of Judy”.’

“The emancipation of Judy” is now available for purchase at Amazon, Barnes and Noble in the US and select bookstores worldwide for Hardback $32.99 USD and£25 Pound Sterling and Paperback $17.99 USD and £14.00 Pound Sterling