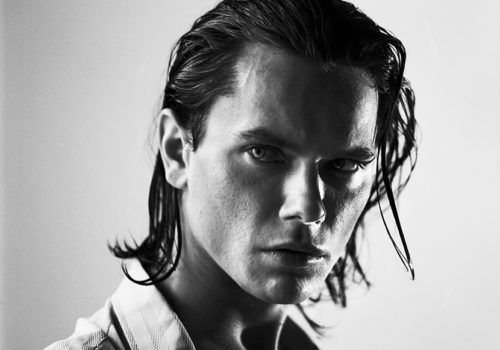 I first met River Phoenix in 1990 in Gainesville, Florida. I’d flown down from New York City. I was shooting him for a magazine. I don’t remember which one. His family had this beautiful wild piece of land on the edge of a swamp. I was there for two days. We smoked pot, drank beer, climbed up to his tree house, swung on a rope, bounced on his trampoline and went on an alligator hunt just to spot one and we did. At night he and his band got together and jammed. It was this wonderful kind of Peter Pan fun time we had far far away from Hollywood.
Three years later Detour magazine contacted me to shoot River for their cover. At least they wanted to shoot him but couldn’t get him to agree. I was now living in Los Angeles and River was there shooting the last film he completed “The Thing Called Love”.

Detour asked me to make this happen knowing I knew him. When I got River on the phone he asked if we could shoot photos but not for any magazines, just for fun. Which is probably the coolest gesture anyone has ever made to me. I told him I’d love to but it might be a bit awkward at this point. I promised him the shoot would be very low key and not some over the top celebrity production. He agreed. Because of his filming schedule we had to shoot at night. When he and his girlfriend at the time, actress Samantha Mathis, his co-star in “The Thing Called Love”, got to the studio I’d rented he seemed very worn out and a little edgy. Still very beautiful but the boyish carefree kid I met in Florida looked gaunt, sweaty and his skin was very broken out. It was quite a shift. He was still, though very much a gentle and kind hearted soul.
When I got River in front of the camera after getting some make-up on him and choosing which clothes he’d wear I saw something going on with his face that I knew to be the affect of opiates. And it kind of floored me. Had not seen that in a long time. I had been a heroin addict for 8 years as a young adult and there is this thing that happens to your face, your muscles…   when all your features just seem to being hanging limp on your bones. And that’s very much what I recognized with River. It comes and goes, not a constant thing, but was very obvious to me.

The shoot itself was one of the most remarkable experiences I ever had photographing someone. River was stunning and fearless and without my having to direct him much, more like trying to keep up with him, he went from one amazing pose to another like a great improvisational dancer. And kept going and going…   so angelic at times and then raging at me to keep up… “Get this! Now this! What else can we do?”
We wrapped it up about 2 or 3 AM. The last few shots we did were of him and Samantha. I shot these in June of 1993. It was his last formal portrait shoot. River passed in October of 1993. Shortly after the shoot I was hired by the producers of “The Thing Called Love” to shoot stills on set for two weeks. That was the last time I saw sweet River.