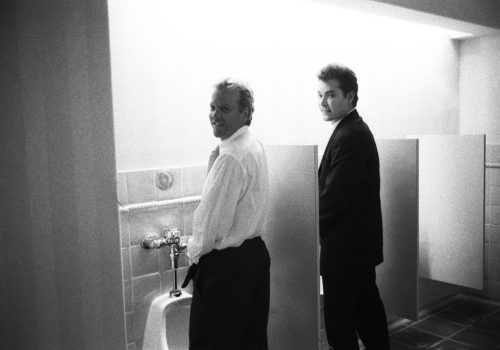 1975 is the year I mark as being my first as a professional, I was twenty years old. I decided I wanted to be a portraitist after studying with Philippe Halsman and Arnold Newman. I started out by writing letters to every famous artist, actor, musician, director, writer, politician…  everyone I’d heard of asking to photograph them. I didn’t have any connections to them. But I lived in Manhattan where many of them did. I’d mail my letter with a few of my photos asking for fifteen minutes of their time. The very first week a few wrote back with a yes, amazing! After that I got very intense and driven pursuing all the artists I admired.

The bulk of my work are shoots I’ve arranged this way. If I wanted to photograph someone I’d figure out how to contact them and get my work to them. It was never for pay or publication. It’s just what I wanted to do, people I wanted to meet. And how cool to go to “The Factory” to shoot Andy Warhol simply because I asked and he said yes because he thought my work was good enough. I ended up shooting Andy’s portrait four times. That led to shooting a lot for Interview Magazine. Which led to getting an agent, getting lots of fashion shoots, getting my studio right across the street from “The Factory” and a very bohemian lifestyle.I had a lot of success early on.

To keep things interesting, I started shooting heroin.  Made a mess of my life.  Lost everything, ending up broke and homeless.  It took a while, but I got my act together. Starting over just the way I began, mailing the letters.

I moved to Los Angeles in 1991, working mostly in the entertainment business and in that mostly in the movie business.In 2004 I stopped shooting.I  needed a break from it and there were other creative pursuits I wanted to devote myself to . In 2012 I started shooting again.  Loving it more now than I can ever remember.