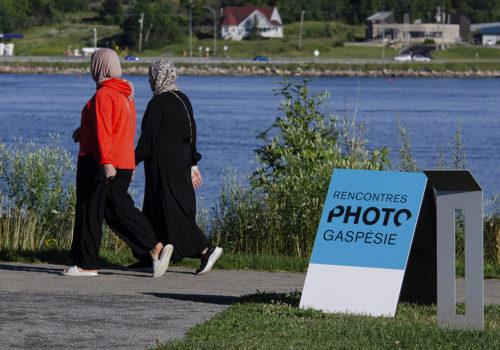 The 13th Rencontres de la photographie In Gaspésie (Canada) will be taking place this summer in 12 municipalities, towns and national parks on the peninsula,  the chosen  theme is Radical hope. Presented for the most part outdoors, the 18 exhibits and installations will display the work of 16 artists from Québec and elsewhere in the world. The great majority of the exhibitions are running from July 15 to September 30, 2022.

According to Rencontres’ executive and artistic director, Claude Goulet, “this theme came up as a cry of hope to express in a loud and clear way the urgency and the need to create, as an assertion of the necessity to act with regard to the environment, to living together, to inequalities, when confronted with  global cynicism.”

In the Côte-de-Gaspé RCM, Impermanence by Alphiya Joncas (Havre-aux-Maisons, Québec) will be presented on the site of  the Théâtre de la Vieille-Forge, in Petite-Vallée, while Seeing the Light of Day by Vanessa Winship (Folkestone, United Kingdom), represented by Agence VU, will take place near Maison Horacio LeBouthillier (west of the other buildings of the Birthplace of Canada historic site), in the town of Gaspé.

In the Rocher-Percé RCM, Other Fables, by Éliane Excoffier (Sutton, Québec), will be presented in the Charles-Robin historical center in Île-Bonaventure-et-du-Rocher-Percé National Park, in Percé. In the same sector, on the boardwalk, the public will get to see An Unfinished Portrait (score for two voices) by Sophie Jodoin (Montreal, Québec). In Chandler, the park in front of Cantine du Chenail will be hosting A Fragile Landscape by Ewa Monika Zebrowski (Montreal, Québec).

In the Bonaventure RMC, Fly-On-The-Wall, by Laurence Hervieux-Gosselin (Montreal, Québec), will be presented on the boardwalk in Paspébiac. Near the tourist information office in Bonaventure, Victorine Alisse (La Bassée, France) will be exhibiting In Your Footsteps. In New Richmond, Taylor’s Point Park will host Kochan by Alessandra Calò (Reggio Emilia, Italy).

In the Avignon RMC, Maria will host the exhibit Roadside Lights by Eiji Ohashi (Sapporo, Japan).

Four exhibitions will take place in Carleton-sur-Mer. The Stars Are Dead But Their Light Lives On, by Fiona Annis (Montreal, Québec), will be presented at the Vaste et Vague artist center from August 5 to September 3, 2022. The Atlantic Wall by Julie Hascoët (Brest, France) will be on exhibit in a room at the Auberge des Caps in Carleton-sur-Mer. In a unique concept, the public is invited to get in touch with the establishment to reserve the room occupied by this exhibit. Liquid Flowers, Specimens and Other Refuges, by Mélissa Longpré (Montreal, Québec), a native of Carleton-sur-Mer, will be presented at Parc des Horizons (municipal beach). Finally, artist-curator Louis Perreault (Montreal, Québec) will be presenting the exhibition The Books of Experience, bringing together some 15 books by Canadian artists, as well as a photo series entitled Resonant Pages at Bibliothèque Gabrielle-Bernard-Dubé, from August 5 to September 3, 2022.

Miguasha National Park, in Nouvelle, will host What you see will not be here tomorrow, by Aislinn Leggett (Montreal, Québec), outside the former visitor center. The exhibit will consist of the results of the artist’s photographic mission on the landscape of the Outaouais that she undertook in 2021-2022. The Battle of the Restigouche National Historic Site, in Pointe-à-la-Croix, will present John Max: The Cast Image, an exhibit comprising unpublished photos by John Max (1936-2011) and others not seen for over half a century, under the curatorship of Michel Hardy-Vallée.

Lastly, the work of Alain Lefort (Montreal, Québec) will be presented in Matapedia. The Belvédère des Deux-Rivières will host his exhibition Horizon (alt.14m), while his projection Murmurs will be screened at the Matapedia Train Station – Art and Community Centre (Quartier Éphémère and Vaste et Vague artist center) from July 29 to August 29, 2022 (see the schedule on the Rencontres website).

Rencontres on Tour
From August 17 to 20, 2022, this unique event that lies at the heart of Rencontres will bring together visitors, artists and the local population for encounters on the subject of creation: open-air projections, discussions with the artists, guided exhibit tours, and so on. The full program will be announced from early August 2022 on photogaspesie.ca, in the Events section.

About Rencontres
An annual summertime event, Rencontres de la photographie en Gaspésie introduces the public to contemporary photographic creation, its language, its codes and its various esthetics through occupation of a particular region: the Gaspé Peninsula. There it presents a series of exhibitions and installations, public events conceived as a space for reflection and initiation, and a program of artist residencies and of exchanges with festivals in other countries. Information: photogaspesie.ca.