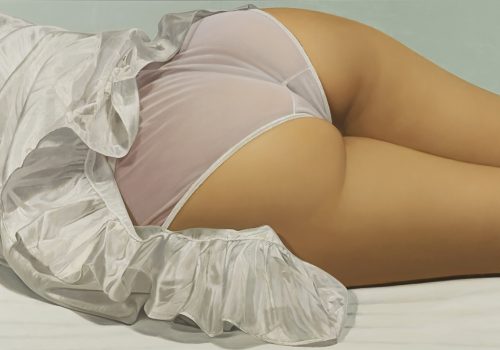 No, John Kacere was not a photographer, he was a painter. One of the masters of the PhotoRealism movement.

The reason for this publication; an emotional memory: when I first entered Daniel Filipacchi’s office in the 1970s, there were several Kacere paintings on the walls. Anecdotally, there was also a sublime naked woman on the sofa; it was a sculpture by Duane Hanson!

Louis K. Meisel Gallery presents Remembering John Kacere, a solo exhibition that surveys and celebrates the career of the late Photorealist painter. Recognized for his large-scale paintings of women’s lingerie-clad midriffs, Kacere was an early practitioner in the Photorealist style. His surprising compositions have long been the subject of controversy, and yet, his work continues to resonate with contemporary audiences, having served as visual inspiration to cultural tastemakers that include Sophia Coppola and Christopher Kane.

Originally an Abstract Expressionist, Kacere’s iconic figurative paintings began in the late 1960s. Featuring only the torsos of women clothed in silky lingerie and nightgowns, this series of paintings was presented in large-scale, with many early works measuring 55 by 80 inches or larger, far greater than lifesize. Dramatically cropped from the bottom of the rib cage to mid-thigh, these oversized female bodies were quite shocking when they were unveiled. Early collectors of his work were perceived to be forward-looking—overcoming prudish moors that existed at the time towards sexualized imagery.

Sensual and provocative, these paintings are undoubtedly created by and for the male gaze; and yet, Kacere’s work has weathered feminist critiques. Using highly polished techniques and elements, Kacere’s work captures a Pop sensibility that continues to resonate with audiences today. His beautifully rendered compositions adeptly juxtapose undulating silken fabrics against the matte surface of his subjects’ skin. Not at true portrait, nor landscape, nor still life, Kacere’s work is perplexing, in that, it embodies elements of all three. In this regard, his work, though Realist, is disruptive, and when considered with the aforementioned elegance of his work, it is this combination of elements that has made Kacere’s work enduring.

John Kacere was born to a Lebanese-American family in Iowa in 1920. He earned his B.F.A. and his M.F.A. from the University of Iowa in 1949 and 1950 respectively. His paintings are in the public collections of several institutions, including the Stedelijik Museum in Amsterdam, the Portland Museum of Art, and the J.B. Speed Museum in Louisville, Kentucky. He died on August 5, 1999 in Cedar Rapids, IA at the age of 79.

from February 20th to March 28th