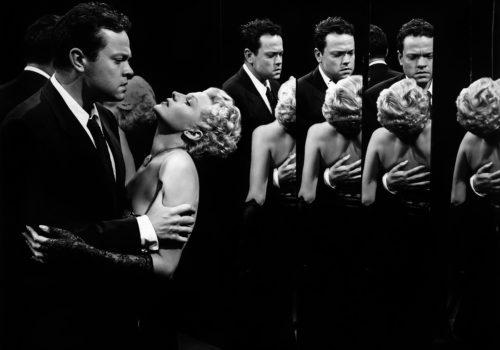 Film Noir Portraits, published in November 2022 by Reel Art Press, includes unseen images and previously unpublished outtakes from Night of the Hunter and Sweet Smell of Success, and classic stills from films like Gilda, Double Indemnity and Lady From Shanghai.

A collaboration between Paul Duncan and Tony Nourmand, two of the UK’s most renowned experts on film noir and film art, respectively, the book also features images from celebrated B-noirs like Gun Crazy and The Hitchhiker to delight the most ardent cinephile. Duncan’s eloquent and expert observations perfectly complement Nourmand’s peerless knowledge of film artwork.

The photographs are hand-picked from the collection of mptv, one of the world’s most exclusive archives of entertainment photography, and every page has been printed in Reel Art Press’s exceptional quality to showcase the photographers’ remarkable work in chiaroscuro.

An exquisite collection of the very best portrait photography of the Film Noir era, these images remain some of the most innovative and striking portraits in the history of cinema and still contain the same raw power as they did in the 1940s.

Paul Duncan is a film historian, editor and writer and an expert on film noir. He founded Pocket Essentials in 1999, editing around 50 titles in the series and writing several, including Martin Scorsese, Alfred Hitchcock, Film Noir and Noir Fiction. He has edited over 50 film books for Taschen, including The James Bond Archives, The Charlie Chaplin Archives, The Godfather Family Album, Taxi Driver, Film Noir, and Horror Cinema, as well as publications on film directors, film genres, movie stars, and film posters.

Tony Nourmand is a world authority on the imagery of film. He co-founded the world’s leading gallery in original film posters, which he owned for over 20 years and was Christie’s, London, consultant for Vintage Movie Posters from 1992 to 2003. Tony has been instrumental in forming some of the world’s leading private and public collections and has exhibited worldwide. Tony has edited over 20 best-selling books on the subject of movie posters and film. He is the founder and editor-in-chief of Reel Art Press.