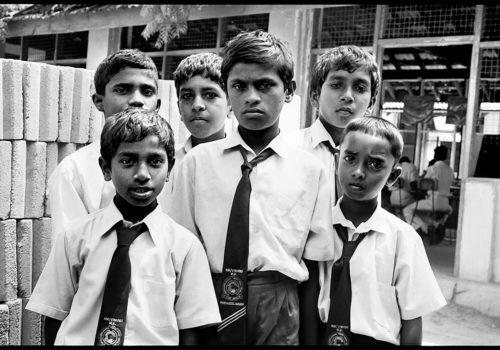 In 2006, photographer Hunter Barnes (b. 1977) travelled to Sri Lanka, intending to document the devastating aftermath of the 2004 tsunami. Instead, he arrived amid rapidly increasing tensions in the civil war and a breakdown of the ceasefire established four years previously. Now fifteen years later, Hunter Barnes and Reel Art Press present A World Away, a timely book of black and white photographs taken in the Eastern Province among the Tamil people, accompanied by Barnes’ personal handwritten diary entries documenting his time spent there. It is introduced by a foreword from Richard Saunders, Director of Middlebury College Museum of Art.

A World Away offers a rare glimpse into a largely visually undocumented period in Sri Lankan history. Barnes was one of very few Western photographers on the ground at the time, as almost all international press were forced out of the country. Meanwhile national journalism was also censored and those reporting internally faced harassment and intimidation.

This is a long-buried archive, with a fifteen-year hiatus between image making and publishing, attributed to Barnes’ personal journey of processing the experience. He writes, “what I lived and felt has been buried far in my mind,” both literally and metaphorically, “sealed shut in a box of film and a journal I am just now able to read.” The book is dedicated to the Tamil people of Sri Lanka, with whom he spent his time, and their stories of hope, resilience and bravery that he is now ready to share.

Located off the southern tip of India, Sri Lanka is a country heralded for its natural tropical beauty, yet since 1983 civil divides have birthed war, aggression and death on its lands. After having been emancipated from the British colonial empire in 1948, tensions rose between the Tamil people, and the Sinhalese majority. In the 1980s, The Tamils aim to create an independent state in the north and east of the island, with the resulting bombings, assassinations and attacks, made it difficult to travel to Sri Lanka. Barnes visit in the wake of the 2004 tsunami was during a period of fragile stability after the 2002 ceasefire, but as he arrived that peace was breaking down and there was a resurgence in fighting and tension.

What he found was a country divided and devastated by both natural disaster and resurgence of civil war. Yet, amongst this was a strength he had never witnessed before – children, families, mothers and humanitarian aid workers banding together and continuing their daily lives despite it all. He pictured children attending school, shelters funded by the Tamil Rehabilitation Organisation in refugee camps, wandering fishermen and communities returning to harvest their fields once more; only one soldier of the Government Special Task Force is photographed, perhaps attesting to the fear and suspicion with which all military men were treated during the period.

The images, taken together, paint a portrait of a complex landscape, with the people holding on to hope in light of continued, unending violence and a devastating natural disaster. The accompanying diary entries are personal and deeply emotional, allowing one access to Barnes’ innermost thoughts as he travelled and photographed Sri Lanka. Between the images and the text Hunter Barnes reinforces his reputation as a unique photographic talent, acclaimed for his black-and-white portraits of cultures and communities often ignored by the mainstream.

An exhibition of Hunter’s photography from A World Away will open at the Middlebury College Museum of Art in 2024, where the work will be preserved in their permanent collection.

Hunter Barnes trained in photochemistry and traditional photographic techniques. At a young age, he began a nomadic life on the road. In his early twenties, Hunter self-published his first book, Redneck Roundup (2002), documenting the dying communities of the Old West. Other projects followed: four years spent with the Nez Perce tribe (The People, 2020); months with a serpent handling congregation in the Appalachian Mountains (A Testimony of Serpent Handling, 2012); a period emersed in NASCAR Racing (Spirit of the Southern Speedways, 2019), and inmates in California State Prison (Outside of Life, 2004). Fundamental to Hunter’s work is the journey, the people, the place. Then committing them to film before they are greatly changed or gone forever. A World Away is Hunter Barnes’ ninth publication.