Rania Matar – In Her Image 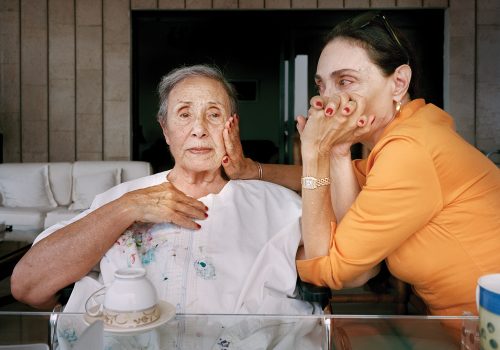 The exhibition features 43 large-scale color images by American photographer Rania Matar. In four different series, Matar uses portraiture to examine the nature of female identity in girlhood, adolescence, and middle age in the United States and Lebanon. The photographs address her subjects’ identities, but also reflect her own experiences as a woman of Palestinian origin born and raised in Lebanon.

“Rania Matar is an award-winning artist whose work has been exhibited widely in the US and internationally,” said William Griswold, director of the Cleveland Museum of Art. “Visitors have an opportunity to immerse themselves in the artist’s monumental photographs, which explore female identity and the artist’s own cross-cultural experience as a Lebanese-born American woman and mother.”

Matar began photographing her children when she became a parent, but the tragedy of the 9/11 attacks led her to focus on using the medium to tell others’ stories. “It seemed that the world had become divided into Them/Us,” recalled the artist. “I wanted to tell a different story of the Middle East.” Her first visit to a Palestinian refugee camp in Lebanon in 2002 provided additional motivation; she felt a strong and immediate connection with the women, especially the mothers.

“Matar is a masterful portraitist who, by focusing on the individual, reveals truths about the universal experience of what it means to be female,” said Barbara Tannenbaum, chair of prints, drawings, and photographs, and curator of photography. “She establishes a strong and intimate bond with her sitters as she explores the transitions from girlhood through puberty to womanhood and middle age.”

Created between 2009 and 2016, the four series on view: L’Enfant-Femme, Becoming, A Girl and Her Room, and Unspoken Conversations contain examples from both American and Lebanese cultures. The location of each photograph is not always evident, a fact that reflects the influence of Western culture on the Middle East, and the artist’s desire to focus on “the commonalities that make us human, to emphasize underlying similarities rather than apparent differences across cultures.”

L’Enfant-Femme (2011–16) was inspired by the artist’s 13-year-old daughter, who was rapidly growing out of girlhood. L’Enfant-Femme is a French expression for that fleeting preteen and early teen stage when a girl starts to become a woman. Nowadays, girls this age have been raised on selfies; they are accustomed to being photographed and immediately seeing the result. Matar denied them this instant feedback by shooting with a medium-format film camera. “I also asked them not to give me the ‘selfie’ smile, so they have to think about how to pose,” says the artist. Some girls instinctively adopted stereotypical seductive postures, echoing the sexualized images of women that abound in the mass media, while others display what the artist has termed “a beautiful awkwardness.”

Becoming is a continuation of L’Enfant-Femme. Matar returned between two and five years later to photograph some of the same young women, often in the same location. In these pairs of photographs, we see tweens become teens as Matar explores the passage of time and the physical and psychological transformations that are part of growth and maturation. “It is touching and endearing,” she has noted, “to observe the subtle changes in body language, hand gestures, feet positions, and attitude in these photographs.”

Photographing her teenage daughters with their girlfriends, Matar discovered “how aware they were of each other’s presence, and how much the group affected the identity they were portraying to the world.” For the series A Girl and Her Room, she decided to photograph each young woman alone “in the personal space she was curating for herself, where she was exploring her own sense of identity.” While each teen is a unique individual, the artist observed that “there’s something very universal about being a teenage girl, whether it’s in Lebanon, in a Palestinian refugee camp, or in Boston. They are all going through that same transition and turning into adults. They might be dealing with it in different ways, but they’re all dealing with it.”

Unspoken Conversations juxtaposes adolescent daughters and their middle-aged mothers to convey the complexity and universality of the mother-daughter relationship. Matar began these dual portraits of mothers and daughters when her eldest daughter left for college in 2013. “I realized that as she was growing up, I was getting older, but also that my role as a mother was about to change,” recalls Matar. “Like the rest of my work, I am exploring through my photography what I find myself and my daughters going through. Observing mothers and daughters together seemed to me to offer versions of the same person separated by the years.”

Rania Matar – In Her Image

The Cleveland Museum of Art