Rania Matar : On Either Side of the Window 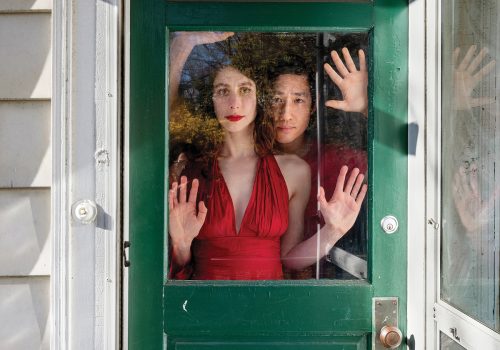 “If the house of the world is dark,

Love will find a way to create windows.”

It seems as if life went on hold those past few weeks – for everyone. We all in this together, in the same boat, with life at a standstill, reduced to the confinement of home. This virus is such an equalizer, making us all re-evaluate our shared humanity, our fragility, and our priorities.

Isolation and confinement offered me the gift of time at home with my family, and in the studio with my work. I had almost forgotten how precious both are. With time and space to re-evaluate what matters, and with a need for human interaction, I reached out to a few friends and started visiting them – while keeping the physical distancing – and making their portraits through the window. A new project about “connecting across barriers” emerged. From a few friends at first, the circle kept growing. It humbled me how many people were willing to be part of this, but also how important the human interaction we often took for granted, was – for both of us on either side of the window and of the camera. Despite the fact that we only communicated across a physical barrier, we really and truly made a connection. The sense of being inside or outside was blurred. I am outside and looking in, but seeing the outside reflected onto the person in front of me. Depending on where I stood, we could even overlap, connecting us on many levels, metaphorically and personally despite the physical barrier between us.

As the weeks went by and the “new normal” settled in, the portraits started transforming with the window almost acting like a stage and people on the inside becoming active participants in the photo session, bringing their ideas and their performances to the interaction we were creating.

This work is in progress.

Rania Matar was born and raised in Lebanon and moved to the U.S. in 1984. As a Lebanese-born American woman and mother, her cross-cultural experience and personal narrative inform her photography.

Matar’s work has been widely exhibited in museums worldwide, including the Museum of Fine Arts, Boston, Carnegie Museum of Art, National Museum of Women in the Arts, and more. It is part of the permanent collections of several museums, institutions, and private collections. A mid-career retrospective of her work was recently on view at the Cleveland Museum of Art, and at the Amon Carter Museum of American Art: In Her Image: Photographs by Rania Matar and at the American University of Beirut Museum in An Image and Her Women.

Matar received a 2018 Guggenheim Fellowship, 2017 Mellon Foundation artist-in-residency grant, 2011 Legacy Award at the Griffin Museum of Photography, 2011 and 2007 Massachusetts Cultural Council artist fellowships. In 2008 she was a finalist for the Foster Award at the Institute of Contemporary Art/Boston, with an accompanying solo exhibition.

Rania Matar : On Either Side of the Window

Portraits During Covid-19 – Work in Progress