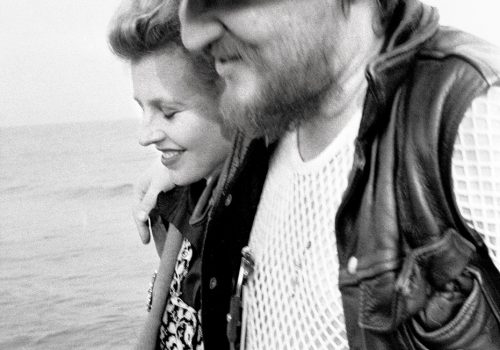 The book is a visual distillate of Rainer Werner Fassbinder’s art, with key stills from each of his movies, an essay by German film historian Hans Helmut Prinzler, and a birthday message by John Waters.

Mr. Fassbinder, you’d be seventy-five years old this year, so you’d remember the —957 Tune-Weaver’s hit I just sang to you on this page. Yes, you may be “colder than death”, as one of your film titles predicted, but your work still burns with defiance on the screen. From beyond the grave of independent cinema your brilliantly perverse filmography continues to inspire generation after generation of cinema outlaws with its obsessively driven, drug-induced, keen-witted, political incorrectness. You are a cult that still attracts, hypnotizes and joyously damages film buffs worldwide and we, your slavish followers, thank you from the bottom of our wounded little hearts.

I remember when I first met you at the Berlin Film Festival. There you were with Douglas Sirk! You in your dirty Levi’s and leather, he elegantly dressed in a crisp white suit. I wanted to bow down. You were both kind and welcoming to me and my early trash epics which were just getting to be known in Germany. Douglas Sirk knew what Pink Flamingos was!? I was astounded and moved and it was all because of you.

Later, I was so proud when New Line Cinema, the distributor of all my films at the time, announced they were going to release your movie Despair in America. I played dumb when the publicist eventually complained that she had sent you two first-class airline tickets to come to New York to promote the film and even though you had accepted and flown over, you’d never shown up to do the interviews. I had seen you out at the leather S&M bars the night before but I kept my mouth shut. I don’t snitch on royalty.

Can I call you Rainer? If so, Rainer what can I give you for your birthday but praise? God above, I ask you, Is there a better performance in film history than that of Irm Hermann in The Bitter Tears of Petra von Kant? If not, isn’t there an award bigger than an Oscar that we can give her while she’s still alive? And Fox and His Friends; finally, a director who understands gay “trade”. I’d get down on my knees to service your perception and no one could call it necrophilia when your film is so alive and throbbing with wit. Martha—I salute you! A movie so mean, so cruel, yet how hard did I laugh over the scene where the husband forces his new wife to get a painful sunburn on the day of their wedding just so the honeymoon sex that night will be more awkward and painful? I may roast in hell for enjoying your romantic on-screen torture but what director since has been more daring or original?

Fassbinder, I honor you! My all time favorite of your work? In a Year with 13 Moons, your most brutal, feel-bad diversely-twisted film. The New York Times already wrote, “It’s only redeeming value is genius”, so what more can I say? If you don’t like this movie you should kill yourself ?

I’ll blow out your candles for you but first I’m gonna look through this new book of film stills. Oh God, the memories! First of all, you were cute. A hot mess but still a film stud. All those smart talented women surrounding you. Straight. Gay. Bi. Even Freud would be confused. You married one of them too; the magnificent Ingrid Caven. Hanna Schygulla—what a leading lady! You made her so famous she got cast in a Chuck Norris movie—The Delta Force. That’s what I call crossover with a capital C. No wonder your real-life boyfriends were so miserable—they had tough acts to follow.

Race, class, history, Nazis, family, even our own mother—you “fucked” them all in the long run. Looking through this book readers will feel like straight guys panting over their favorite pin-ups in Playboy Magazine only instead of hot babes, they’d be revisiting their first memories of a Fassbinder movie which is a new form of eroticism in itself. I Only Want You to Love Me, one of your titles begged. We do, Rainer, we do. And if anybody disagrees? Well, there’s a lot of us Fassbinder cultists still out here and we know where you live…

PART in Rimini : where gifts constitute a Museum of contemporary art (Emilia-Romagna Photo Valley: episode ONE)