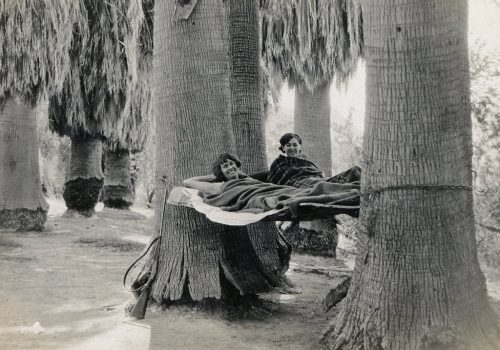 I love the small museums you find in out of the way places. Not so focused on the large, culture shaping events that are the concerns of the great museums they often concentrate on the lives of the people who lived nearby. In another story I wrote recently I said “There is history everywhere, the small history of everyday people. We can easily see plenty of stories and memorabilia from the lives of the famous and the big events that shape us, but maybe we could use a few more stories about the rest of us.” Postcards from Mecca is one of those stories about the rest of us.

Postcards from Mecca, currently running at the La Quinta Museum, is the story of two women who lived bold and adventurous lives in the Mojave Desert during the early twentieth century. The women were Susie Keef Smith and her cousin Lula Mae Graves. They were two unlikely companions, brought together by their love of the western desert and their desire to live an adventurous life. Traveling often by Model T, but sometimes on horseback or on foot, and accompanied only by the cameras they carried and the guns that kept them safe, they made friends with the last of the burro driving gold prospectors, and the new workers then building the water and highway infrastructure that would transform the region. They also communed with the hermits and oddballs who found their places in the vast and empty wilderness. And as they lived and camped among their unlikely friends they made pictures. For twenty years they captured the lives of their otherwise unseen friends, photographing them from an insider’s perspective. So in Postcards from Mecca a good part of what is on display are the personal pictures of Susie and Lula. Sometimes we see them with their friends sitting around a campfire or lounging in hammocks. Sometimes the pictures show the travelers visiting prospectors at desolate mining camps and shacks deep in the desert, make visible their incredibly bleak life. And then there are more formal pictures, ones of desert vistas, and palm tree-lined oases, and of the large scale work then transforming the landscape. These are the pictures they made intended to become postcards, which were then sold throughout the region.

Postcards are pretty much gone now, and if you are young, you may not even have noticed their passing. Smartphone cameras and Instagram have taken their function. But not long ago as you traveled you bought postcards and sent them to your friends and family, a sign that all was well and a marker for where you were. Looking back at them now, and in the context of their personal pictures, it is clear the postcards of Susie and Lula are also small glimpses of their life, the places they were passing through. As an aside, if you visit the installation at the museum, you will find a box of postcards on which you can write a loved one’s name and maybe a line or two of your thoughts. If you do that, the museum will pay the postage and even mail this precious thing for you.

After many years Susie and Lula’s lives diverged. They each married and moved away, and they lived full lives, and finally passed on, and they were forgotten except by those who knew them. But they left a record behind, the pictures and postcards they had made, and in a great bit of luck for us when Susie passed on her photos were rescued from a dumpster and scholars took note of them and begin to search out the story.

All this story is told in Postcards from Mecca: The California Desert Photographs of Susie Keef Smith and Lula Mae Graves, 1916-1936, the wonderful book which accompanies the exhibition. The book is filled with the pictures they made but also pictures taken by others that show Susie and Lula filled with life and wandering free in a wild place. There is fine writing by Ann Japenga, Warner V. Graves, Robert B. Smith, Ronald V. May, Steve Lech, Russel L. Kaldenberg and Buford A. Crites that tells us the long lost stories of Susie and Lula, offering readers a personal glimpse of the hardships they faced and the spirit they faced them with. Combined with the pictures, the stories bring their life and times to us and make it all very real. What better thing can a story do?

To me, this is the special province of the small museum. To show us the lives of those that were not famous but were important anyway. There are billions of us, and for the most part, we come and go without notice. Our families and friends remember us for a while, and then we fade away. The wonder of writing things down and making pictures is that it prolongs the sharing of our existence and makes us visible to others. Postcards from Mecca shares the lives of two ordinary yet remarkable women, and the La Quinta museum has done a fine job of bringing them to life for us to see.

Postcards from Mecca is currently running, the exhibition closes May 1, 2019

The book –Postcards from Mecca: The California Desert Photographs of Susie Keef Smith and Lula Mae Gravesis available from the Mojave Desert Heritage and Cultural Association or on Amazon

All photos except where noted from the Warner Graves collection