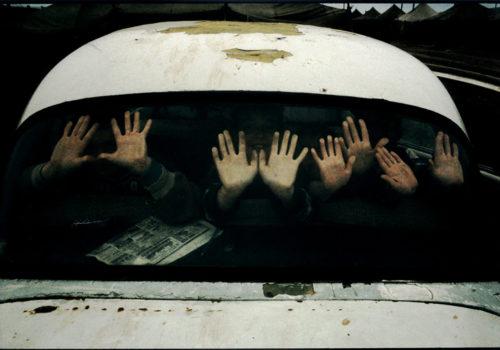 The Polka gallery presents “Vies à vif”, an exhibition that brings together the photographs of Stanley Greene and Edouard Elias. Two generations of photographers who shared the same commitment: to bear witness to history in motion. The first, recognized worldwide, has become a legend of photojournalism. The second began his career at 21, covering the civil war in Syria. To pay tribute to Stanley Greene, five years after his death, Polka has chosen to compare his work, his approach and his personality with those of Edouard Elias. Between them, they have covered almost half a century of crises and conflicts.

A former member of the revolutionary African-American group The Black Panthers, Stanley Greene took up photography after meeting W. Eugene Smith, one of the pioneers of photojournalism. Rwanda, the Balkans, Iraq, Somalia, Kashmir, Syria, Afghanistan… Since the fall of the Berlin Wall in 1989, Stanley Greene has been part of all the major conflicts that have shaken the planet. The defining moment of his work: the war in Chechnya that he covered for almost ten years. He made a series of moving images and a book “Open Wounds” for which he received, in 2004, the prestigious W. Eugene Smith award and a World Press in the “Daily Life” category. In 2005, he traveled to New Orleans to photograph the destruction that followed Hurricane Katrina. He then returned there to document the reconstruction, noting that a natural disaster can, like war, ravage the lives of the population, cause famine, looting and segregation. He is one of the founding members of the Noor agency since 2007.

Originally from Gard, Edouard Elias lived in Egypt for ten years before returning to France in 2009 to begin business studies. He soon turned to photography and entered the Ecole de Condé in Nancy, where he developed a fascination for war photography. In 2012, he made his first report in a Syrian refugee camps in Turkey, then in Syria. He returned to the country at war in the winter of 2013, before being held hostage there with three other French journalists, from June 2013 to April 2014. On his return, Edouard Elias began a long-term project on the Foreign Legion in the Central African Republic, then in France. At the same time, he produced reportage on rape as a weapon of war in the Democratic Republic of Congo, the rescue of migrants in the Mediterranean or the closed educational centers of the Judicial Protection of Youth in France. Edouard Elias now works for the national and international press. For several years, Edouard Elias has been working with a large format camera. Edouard Elias won the Prix de la ville de Perpignan Rémi Ochlik in 2015, and is represented by the Polka gallery since 2019.