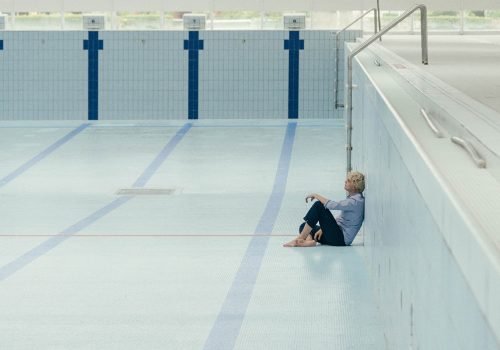 As always, an important section of the festival provides support for creation with the allocation of residencies to four emerging photographers. Selected by a jury chaired by Sarah Moon and composed of Sarah Moon, Philippe Augier, Lionel Charrier, Babeth Djian, Alain Genestar, Thierry Grillet, Julien Guerrier, Marin Karmitz, Anne Lacoste, Laura Serani, this year Clara Chichin, Nadine Jestin, Manon Renier and Hugo Weber revisited Deauville, the Normandy coast and countryside, with approaches ranging from documentary to portraiture, study and staging. The variety of approaches is respected and underlined by the presentation of their work at Point de vue.

An autobiographical work on the theme of emotions as faithful as they are fickle, following us everywhere, all the time. Nadine Jestin gives us the color of the landscapes and the depth of the experiences she lived during the residency.

“The courage to lay bare. The audacity and the risks of the profession. Asphyxiation and other jokes of the mind. The ambivalence of luck. The melancholy of impermanence. Doubt and constancy. The fear of the deep end. The hope of the meeting. The frustration of the turf. The wave to the soul of a hazy day. The comfort of cotton. Confusion rose chameleon. The power of spinning. Travel in your emotions instead of running away from them. Go around them, draw their outlines. ” Nadine Jestin

And also on the program

Mathias Depardon / Being yourself is the best revolution

Mathias Depardon, more used to covering tensions and conflicts, tells, through his meetings, of this strange and subtle in-between, between the end of confinement and the beginnings of the lifting of the lockdown. After crossing confined France for Liberation, he followed for the festival the youth of Deauville and those who came to the beach for a deep breath after two months of confinement. We feel the joy of being together, the need for movement and an explosion of positive energy, quite “contagious”. The large-format exhibition is presented in a new location, L’embarcadère.

Philippe Chancel, grappling with a sort of special issue from his long-term work, Data Zone, immersed himself in a city / setting and the surrounding landscape, in order to conduct an investigation beyond appearances. The result is a unique and fascinating portrait of Deauville and its surroundings, exhibited in large format on the promenade which links the city to the beach.

Nikos Aliagas / The game is another

Nikos Aliagas, faithful to his image, took over the city like a whirlwind, with his enthusiasm, his curiosity and his photography turned towards others. Result: a gallery of unexpected portraits of popular figures in Deauville and Trouville, children, people seized in the streets, meetings, presented in the square and the lobby of the legendary Normandy hotel.

A new installation is also taking place on the beach thanks to the new partnership with the young photo4food foundation engaged on two fronts: the promotion of photography and the fight against poverty. Four photographers, Charlotte Bovy, Thomas Dhellemmes, Letizia Le Fur and Anaïs Tondeur, also invited in residence during the summer, enrich the program of the festival. A photographic auction for the benefit of the regional Red Cross will be held on October 23 in Deauville and on the Drouot site.

The festival outside the walls

For the first time, Planches Contact is present at the same time outside Deauville:

Low Season by Alisa Resnik at the Leica Gallery

The work produced in Deauville by Alisa Resnik, 2019 guest of the Festival, is presented at the Leica Store fabourg Saint-Honoré in Paris from October 9, 2020 to January 10, 2021.

Echoing the festival and the installation at Hôtel Le Normandy, Nikos Aliagas’s exhibition is presented in the Initial Labo gallery in Boulogne from November 3 to 28.