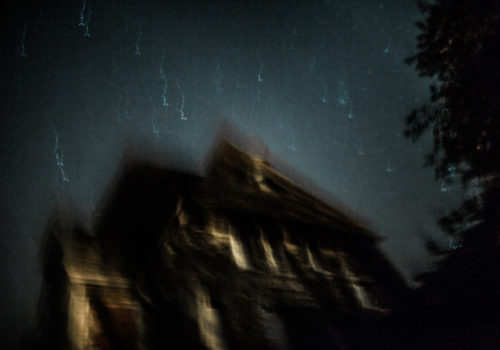 The emerging photographers chosen this year by the Deauville Photography Festival propose a dive into the effects of night, whether it is a source of enchantment or a source of a darker and more disturbing tone.

Even in the middle of the day, it seems to be night. The travellers captured by Antoine Lecharny in his series “Côté fenêtre” (Window side) seem to be walking through an opaque world, as if caught in the mechanics of an infernal clockwork or trapped in a permanent journey. The photographer, born in 1995, received the Grand Prix du Jury de Planches Contact, awarded each year to one of the artists in residence, for this work carried out on the train between Paris and Deauville, capturing the image of the passengers, at all time of the day or night, in particularly bewitching pictures where the harshness of movement is frozen.

Teo Becher’s Home Sensations series, another nocturnal essay, is calmer and more colourful, and focuses on the houses of Deauville. The photographer tries to underline the singular architecture of this corner of Normandy, perhaps more visible at night, lit by street lamps or by an electric blue sky typical of an early evening. The shadows accompany these large houses that seem to sleep better than the inhabitants of the town, fascinating this 29-year-old photographer who lives between Nancy and Brussels, finding in them a “cinematographic” material.

This aesthetic is also found in the work of Alisa Martynova, born in 1994 and originally from Orenburg in Russia. Using a night-time atmosphere, with images bathed in very bright artificial light, she tells the story of migrants who come from different countries of the African continent, each with their own singular trajectory, some of whom have been in Normandy for about ten years. She composes a “metaphorical essay” rather than a reportage, choosing evocative touches to sublimate the beauty of the night and give a visual narrative of these strong lives.

The night is also the privileged subject of Céline Croze, who was born in Morocco and lives in Paris. During a nocturnal wandering, she tries to “catch fragments of life” from a world that “is collapsing”. Open to chance encounters, she is interested in the lives she meets in this photographic wandering, sublimating them into vaporous panoramas whose ghostly imprint we cheerfully recognize.

Planches Contact Festival in Deauville
From 23 October 2021 to 2 January 2021
www.planchescontact.fr

Interview with Laura Serani, director of the Planches Contact festival : “It’s a kind of laboratory, where photography takes shape.”