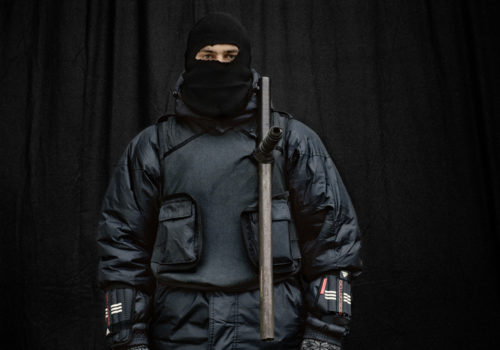 Up until 2020, Taylor-Lind was constantly on the go, regularly travelling on assignment for her main clients, National Geographic and TIME. Last year COVID-19 put a halt to travel for most of us, which prompted the series Photojournalism Now: In Conversation. I wanted to know how the pandemic had impacted freelancers hence the interview with Taylor-Lind. As we discuss in the video interview, Taylor-Lind used the downtime to work on the next step in her long-term project, Ukraine: 5km from the Frontline. More on this shortly.

Taylor-Lind says her interest in Ukraine began in 2014 when she was on assignment to shoot a story on low life expectancy for National Geographic. By the time she arrived in Kiev the war was in full swing and her contacts were no longer in a position to help. Instead of heading home she set up a makeshift studio on the edge of Maidan Square where protestors and authorities were clashing on a daily basis.

At first, she shot portraits of photojournalists who had travelled to Kiev from around the world, but as the protests escalated Taylor-Lind began to photograph the locals. Using a Hasselblad for the portraits, she also affixed her iPhone to the camera so she could engage with her considerable social media following, posting stills and video. The portrait series became a book: Maidan – Portraits from the Black Square.

When her work in Kiev was finished, she began thinking about her next move. It was then she came across tourist postcards for Donetsk. In the video she explains how these postcards became the catalyst for the project Welcome to Donetsk (you’ll have to watch to find out more).

For the past few years, Taylor-Lind and journalist Alisa Sopova have pursued the story Ukraine: 5km from the Frontline, which literally documents the quotidian lives of people living with the constant presence of war: families, the elderly, young people, children. These pictures seem ordinary in their familiarity – scenes of families having picnics, children playing in the garden, a young woman riding a bus. But within these narratives is the subtext of war which is ever present.

“In Donbass, life very much carries on, people still get married, raise children, cultivate land and start new businesses,” says Taylor-Lind. Yet it is not life as normal. Children grow up learning about landmines, where to step and where to avoid. Many villages are bereft of basic infrastructure. Communities are irrevocably marked by grief.

Taylor-Lind says the media has long lost interest in the war in Ukraine, but she and Sopova are committed to finding new ways to keep the story alive. In the interview for Photojournalism Now: In Conversation she reveals that one of the concepts she is exploring involves working with replicas of pieces of shrapnel collected by locals. “Everyone has a bucket of shrapnel,” she says.

To find out more you can watch the interview on Photojournalism Now: In Conversation here.

The Selects Gallery : Chiron Duong : From Architecture to Fashion Photography