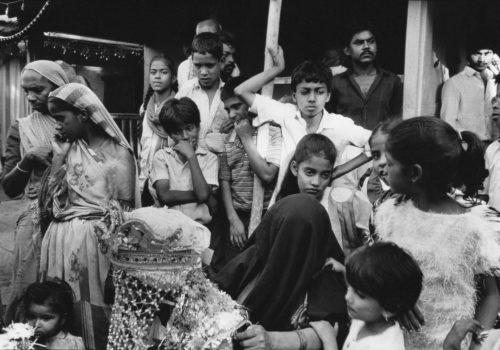 PHOTOINK presents The Passerby, an exhibition of black and white street photography from the archives of Ketaki Sheth, Pablo Bartholomew, Raghu Rai and Sooni Taraporevala.

Spanning the 1970s-2000, these photographs offer a view of the golden period of street photography in India, when photographers roamed the streets, endlessly, to take photographs. It was a time when permission and consent were not negotiated in writing and the photographer could photograph with tacit understanding from passers-by. Photographing the street has increasingly become a complex and contested space today, surveillance and privacy issues notwithstanding. Everyone with a mobile phone is now a street photographer.

For a medium defined by chance, regardless, the street photograph is its most potent and tender expression. Being one of the most practiced genres in photographic history, it carries the potential to transcend the conflicts of the times and present conditions of civil society as it evolves. Viewed through the lens of some of India’s most acclaimed photographers, the street is simultaneously a menagerie, a performative space, a place of repose and quiet revelations. This exhibition examines the street as a site of their engagement and encounter with the passerby.

PHOTOINK announces two new artists’ representations—the photographs of Raghu Rai and Pablo Bartholomew. Going forward, both will only issue silver gelatin prints from their archives. For information about the continuity of the existing edition structure, please contact Devika Daulet-Singh.

Ketaki Sheth (b.1957, Bombay) has been making photographs for almost 40 years and until 2014 was a committed analogue photographer who only used black and white film.

Sheth lives and works in Mumbai.

Pablo Bartholomew (b.1955, New Delhi) is a self-taught photographer whose practice spans nearly five decades. Since 1979 he’s had over 30 solo exhibitions at galleries, museums, biennales, and photo festivals in India and abroad and his work is part of prominent public and private collections. Since 2000, Bartholomew has been excavating his photographic archive, revisiting the period between 1970 to 1983, resulting in a trilogy — Chronicles of a Past Life: Bombay, PHOTOINK, New Delhi (2012); Outside In: A Tale of Three Cities, PHOTOINK, New Delhi (2013); and The Calcutta Diaries, Art Heritage, New Delhi (2012).

Working with his art critic father’s archive of photographs and writings, in 2008, Bartholomew co-conceived the book and exhibition, A Critic’s Eye, which portrayed the cultural milieu of 1950s – 1980s through intimate photographs of his family and artist friends. In September 2012, he self-published Richard Bartholomew—The Art Critic, a voluminous collection of his father’s writings on modern Indian art that chronicled the untold, insider story of the birth of Modern Indian Art.

From 1983 to 2004, Bartholomew’s photojournalistic work featured in every major international publication and won him three World Press Photo awards, including the first prize in 1975 for his series on morphine addicts. In 1984 he won the World Press Photo ‘Picture of the Year’ award for his iconic image of the Bhopal gas tragedy.

In 2013 Bartholomew was awarded a Padma Shri and in 2014 received the Chevalier de l’Ordre des Arts et des Lettres from the French government. He is continuing his long-term project on Indian émigrés, discovering his Burmese roots and expanding on the DNA-based cross-border project, which incorporates textiles and weaving between India, Bangladesh, and Burma. Bartholomew is based in Delhi.

Raghu Rai (b.1942, Jhang, Pakistan) is the most influential photographer in India. He qualified as a civil engineer and began photographing at the age of 23. He joined The Statesman newspaper as their chief photographer (1966-1976) and thereafter was the Picture Editor with Sunday, a weekly news magazine published from Calcutta (1977-1980). In 1971, impressed by Rai’s exhibition at Gallery Delpire in Paris, Henri Cartier-Bresson nominated Rai to Magnum Photos.

Rai took over as Picture Editor-Visualizer-Photographer at India Today between 1982-1991. He worked on special issues and designs, contributing trailblazing picture essays on social, political and cultural themes of the decade.

He was awarded the Padma Shri in 1972 for his work on the liberation war of Bangladesh and its refugees. In 2009, he was conferred the Officier des Arts et des Lettres by the French government. In 2018, he was honoured by Lucie Foundation, New York as Master of Photojournalism. In 2019, Rai was honoured as the laureate of the first edition of the Academie des Beaux Arts Photography Award – William Klein.

In 2012, Raghu Rai set up the Raghu Rai Center for Photography in Gurugram to share his knowledge and experience with younger photographers. He lives in New Delhi.

Sooni Taraporevala (b. 1957, Bombay) received a scholarship to attend Harvard University, where she studied English Literature, Film and Photography. After her BA, she enrolled in the Cinema Studies Department at New York University for her MA. In 1981, she returned to India to work as a freelance still photographer. In 1986 she wrote her first screenplay, Salaam Bombay!, for director/producer Mira Nair. The film was nominated for an Oscar, won more than twenty-five awards worldwide, and earned Taraporevala the Lillian Gish Award from Women in Film in 1988. Her second screenplay, Mississippi Masala, also for Mira Nair, won the Osella award for Best Screenplay at the Venice Film Festival, 1990.

She wrote and directed her first feature film, Little Zizou, 2008, which won a National Award as well as several international awards.

In 2000 she authored and published a book of her photographs PARSIS: The Zoroastrians of India; A Photographic Journey. Photographs from Parsis were included in Tate Modern’s 2001 exhibition, Century City: Art and Culture in the Modern Metropolis, Lille 3000 in Lille 2006, India Moderna, IVAM Institut Valencia d’Art Modern 2008, Photoquai, Musee de Quai Branly, 2009 and solo exhibitions at Harvard University’s Sert Gallery (2012), Chemould Prescott Road, Mumbai (2013), National Gallery of Modern Art, Delhi (2013). The photographs are a part of the NGMA’s permanent collection.

In 2014 Sooni Taraporevala was awarded a Padma Shri. She lives in Mumbai.