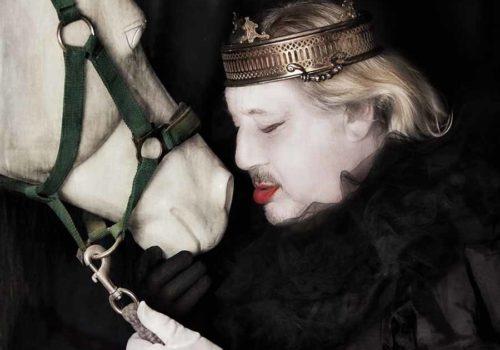 Claire and Philippe Ordioni : Jean-Claude Dreyfus beside himself.

It all started – well almost – the day when Jean-Claude Dreyfus, who spent his life in the parallel worlds of theater and movies, “died” under the influence of mockery. It might sound terrible. But make no mistake, the actor is a hydra, a phoenix. Even better: a pretty flower.

Claire and Philippe Ordioni as meticulous horticulturists took care of it. And suddenly the magic happened between carnival and caravanserai. So much so that “BarOcus Dreyfus” became a wonderful tale (not without a few road trips) and a love story between a magician and his ego where a narcissus had a happy hour in no way ascetic – and that’s an understatement.

The whole is also the most sublime portrait of an actor as he dreams of himself and as we love him and to whom the Ordioni as magicians gave a primal life in seconds and tierces?

Combining photographs, texts and illustrations, their book offers in a baroque way an intimate portrait between reality and fiction. With his powerful shoulders Dreyfus can no longer collapse, he screams and fights, keeps rearing up to reposition himself under the gaze of the two photographers. Therefore the trio no longer has to worry about the morality of such a story. What counts is not there: only a visa for the most gangling existence and imagination retain its importance. Let the light of the spotligts be!

The film “Barocus Dreyfus”: a photographic short film, made from the book “Barocus Dreyfus” is accessible on the internet via a QR code printed in the latter. We find the famous voice of actor Jean-Claude Dreyfus while Claire Ordioni, also an actress, plays the role of a somewhat special storyteller. The film includes filmed scenes, photographs and cartoons.