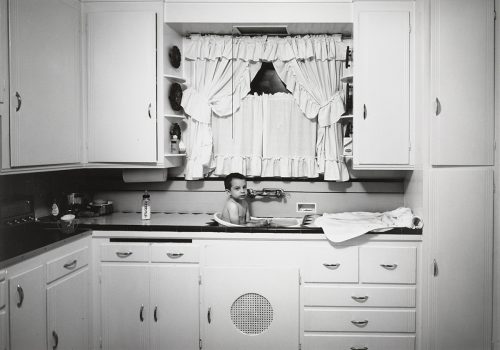 On September 11th, 2019, the newspaper California published an article that went largely unnoticed. This article mentioned the death of the American photographer Chauncey Hare without any more details. Born in 1934, the author of Interior America (1978), died in May, forgotten. Camille Balenieri, a researcher in history of photography, was the only one to have met him recently.

Until the end, Chauncey Hare remained a mystery for those who had the opportunity to approach him. Camille Balenieri, author of the PhD thesis The art of resisting. Chauncey Hare, a political photographer in the United States, from the 1950s to today, is among the rare few people to have interviewed him in his home in San Francisco in 2017. Her dissertation is the first critical monographic writing on his work. Chauncey Hare was not an archetype. He was not one of those who taught in an American university or organized workshops. He stopped selling prints after 1968 , to avoid give up his work to market speculation. Unlike others, he had no desire to exhibit in the most prestigious American institutions.

So who was Chauncey Hare? After training as an engineer, he became interested in the social condition of workers, as seen in the photographs of his book Interior America (1978). He was involved with the movements of the American counterculture and rose up against the alienation of American executives at work in his self-published book This Was Corporate America(1984). After receiving three Guggenheim Fellowships, his photographs were shown at MoMA in 1978 during the Mirrors and Windows exhibition,  alongside Robert Mapplethorpe, Bill Owens and Garry Winogrand. After that, he gradually disappeared from American institutions and stopped all photographic activity in 1985 to become a psychotherapist. He bequeathed his work to Berkeley’s Bancroft Library, and had since then been living a life shut off from photography. His name is missing from most of books relating the history of photography, but the mere fact that the publisher Steidl decided to dedicate a monograph in 2009 on his work, gives an indication of of Chauncey Hare’s importance in history. At the time of his death, the heirs of his school of thought are increasingly undermined by the new American capitalist policies. For those who were lucky enough to see his prints at Berkeley – his mastery of wide angles, the precision of his compositions, the pictorial quality of images – Chauncey Hare was a symbol, whose death marks the end of an era.

Thesis of Camille Balenieri prepared under the direction of Michel Poivert:

François Hers, artist and photographer

Olivier Lugon, Professor at the University of Lausanne

These photographs were made by Chauncey Hare to protest and warn against the growing domination of working people by multinational corporations and their elite owners and managers. Chauncey Hare demanded this statement appear beside his photographs whenever they were reproduced.