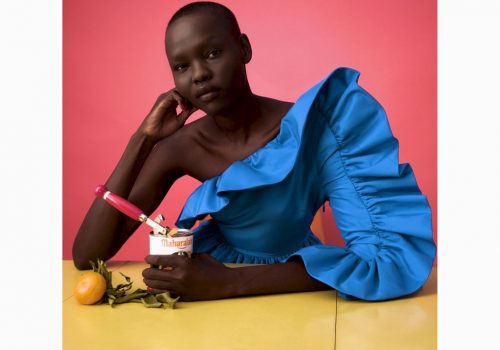 “In keeping with last year’s theme Embracing Diversity, the fourth edition of Photo Vogue Festival, dedicated to the link between Ethics and Aestetics in photography, aims to continue exploring and promoting diversity in all its form”, curator Alessia Glaviano says. “Indeed it takes a step further, by broadening the concept to include the subjects whose stories are being portrayed as well as those behind the camera who tell those very stories”. In addition to the showcase by Inez & Vinoodh at Palazzo Reale, the festival is offering four-day exhibits at Base Milano: A Glitch in the System, deconstructing stereotypes and Fashion Moving Forward, The Screening Room.  A third exhibition, Glitch Extended, is on at the Leica Galerie, near the Duomo. Photo Vogue Festival is also featuring a rich program of free public initiatives and events, as always, spread all over Milan.

A Glitch in the System, deconstructing stereotypes is showing works by the photographers selected through PhotoVogue, the photographic platform of Vogue.it, and after the scouting of an international jury of experts. An enrichment of our visual vocabulary is needed in order to broaden our ability to think, both in linguistic and visual terms and to extend our thinking beyond the known and the familiar. It’s necessary to develop a language for modern society, whose political and social challenges compel us to pronounce against social prejudices. As for the action of deconstructing stereotypes, the guard cannot be lowered, as the meaning of images changes as quickly as society and its conventions. Thus, according to the curator, “an education in visual imagery is essential, even though a great advance has already taken place regarding a more inclusive representation of diversity. The new way of looking at gender fluidity, at the diverse wealth of body types (…) and at the endless forms of beauty, of ethnic backgrounds and origins is an achievement that is changing the contemporary aesthetic standards and is beginning to alter people’s cultural and identity codes in terms of openness, dialogue and encounter”.

Fashion Moving Forward . The Screening Room focuses on how the web and social media have reworded communication dynamics, for instance with still and moving images overlapping seamlessly. This applies also and especially to the world of fashion, where videos are now the go-to medium to portray its world and history (cinema as well as magazines’ illustrated pages, that can be thought of as stills from a film). At their very beginning fashion films used to tend to resemble its predecessor (the cinema): today they have emancipated themselves. They no longer feel the need of a linear plot, opting instead to let shapes, colours, sound and cultured references be the guiding engine. At this point they manage to convey a message as an event that is worthy on its own terms. Almost thirty monitors (one for each artist) show the works by the best fashion film directors: from Gordon von Steiner’s ultra-glamorous films to Pierre Debusschere’s abstract experimentations, just to name a few. A full immersion into images suggesting to us a chain of free, subjective associations.

Glitch Extended is on at the Leica Galerie with photos by Dustin Thierry with his project Opulence, Nanna Heitmann, with Hiding from Baba Yaga, and Romina Ressia, with Venus, the three photographers who obtained the highest score of the international jury within the A Glitch in the System, deconstructing stereotypes contest.

A Glitch in the System, deconstructing stereotypes and Fashion Moving Forward . The Screening Room

A Glitch in the System, deconstructing stereotypes