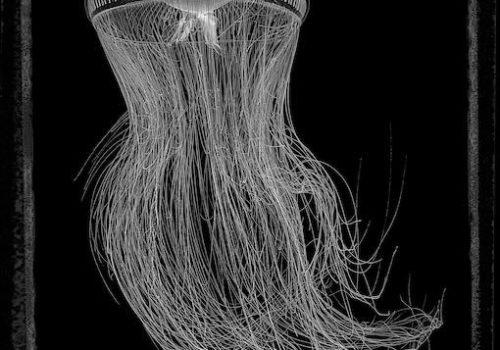 Roland Belgrave presents Jan C Schlegel’s ‘Of Aliens, Mermaids and Medusas’, a limited-edition portfolio, showing a collection of rare and beautiful platinum photographs of one of the most enigmatic of prehistoric sea creatures. The Jellyfish.

This series, shown for the first time at London Photo 2022 is an important look at these beautiful sea dwellers. There is so much that has yet to be researched about them, with recent discoveries being identified every year. Specific to our environment, and climate change it has only just been identified that certain species consume and destroy micro-plastics, until now one of the most damaging of pollutants in our ocean. We are just beginning to fathom the importance of the Jellyfish ecology to our ocean system. This work by Jan C Schlegel is a major project, capturing these crucial and beautiful Jelly Fish.

The artist encourages us to use our imagination, inhabiting the fantasy and dreamscape of each composition. These images unleash the capacity to create, evolve and exploit mental models of things or situations that don’t yet exist, seizing and creating new opportunities, and finding new paths to growth.

The project has taken Jan C Schlegel all the way to Cape Town, working on the series at the Two Oceans Aquarium. They supported his work and allowed Jan to take pictures in their Jellyfish lab. As a friend mentioned to him ‘It’s trees on a lonely planet floating in the universe’,

Although these invertebrates can be frightening, they’re also fascinating and poorly understood. Jellyfish are not fish, they are actually plankton from the phylum Cnidaria (Greek for “stinging nettle”) and the class Scyphoza (from the Greek “cup”).

Most jellyfish have two basic life stages. In the first stage, they are polyps and grow by making buds, like plants. The polyp then buds off a young jellyfish called an ephyra. After a few weeks, the ephyra becomes an adult jellyfish or medusa.

Since jellyfish don’t have any bones, fossils of ancient jellies are challenging to find. But in 2007, a preserved jellyfish fossil was discovered in Utah that’s thought to be over 505 million years old. Dinosaurs lived from about 245 million to 66 million years ago, meaning jellyfish pre-date them by at least 250 million years.