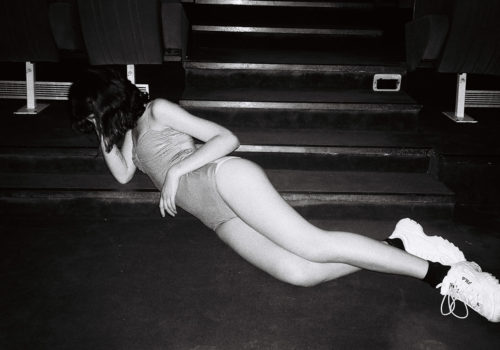 Christophe Guye Galerie presents a solo exhibition by French artist Marianne Marić (*1982). The exhibition shows works from different series – ‚Les Statues Meurent Aussi‘, ‘Rose Sarajevo’ – as well as various single works such as ‘L’Odalisque aux Baskets’ and ‘Nu, Hommage à Jean-Jacques Henner’. Since 2007, Marić has been developing a transdisciplinary body of work, in which she deconstructs the boundaries between various mediums by using the body as a sculptural tool. In her creations, art, fashion, design, photography, music, and video merge through the use of women’s bodies as ‘an extraordinary and fascinating architecture’. She deconstructs stereotypes to better re-use them and has fun playing with symbols to give them another twist.

Marianne Marić can be seen as a ‘classical’ artist, following the tradition of the nude, both pictorially – her beautiful photographic tribute to Jean-Jacques Henner from 2008, recently revisited in ‘L’Odalisque aux Baskets’ – and sculpturally with ‘Les Statues Meurent Aussi’. The images in this series show women of stone who seem to be made of flesh and bone and, conversely, bodies that look like marble, such as this woman in a low-angle shot who could have come out of Bernini’s atelier and from the 17th century in Italy… if she wasn’t having her underwear pulled up and carrying a bottle in her hand, in a ‘baroque’ attitude. Eroticism and playfulness are major forces in Marić’s work. She has women – often friends – pose in provocative poses while humorously manipulating multiple uses of photography: she borrows from classical art and punk culture, hijacks symbols and crumples up the smooth ideas of fashion. Her nudes, photographs of a torso, a back, a half-dressed body, subvert the codes of painting and sculpture in a playful way.

In 2012, Marianne Marić moved to Sarajevo for a residency where, among others, she made the series ‘Rose Sarajevo’. She wanted to go there to confront the history of the country and that of her family. In her own way Marić has collected the testimonies of women, their experiences, inscribing them on their often naked bodies as an echo of recent conflicts and a reflection of the complexity of life in Southeastern Europe, after bloody events committed by men.

Born in Alsace in 1982, Marianne Marić studied at the École Nationale Supérieure d’Art et de Design in Nancy, then at the National College of Art and Design in Dublin, from which she graduated with a Master’s degree in 2009. She now lives and works in Mulhouse and Paris.