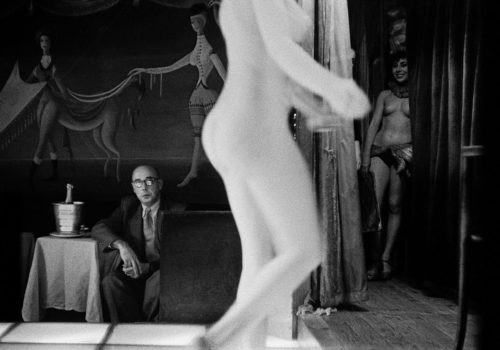 In 1962 Frank Horvat published J’aime le strip-tease 1 (I love striptease). I no longer remember exactly how I came to know these photographs, whether I saw them in a magazine or in the book itself, but they remained engraved in my memory because they stage in a very simple way and with a very great economy of graphic means three elements: darkness, light and the body. They are in a way part of my “photographic imagination”, such as, for example, the famous Fille au Leica (Girl with a Leica) by Alexander Rodchenko, made around 1934.

These photographs by Frank Horvat are for me a typical vision “Aristotelian”, with a pre-eminence of sensitive qualities, in the sense that they relate more to sensation than to proper vision. It is said that Aristotle would have noticed, during an eclipse of the sun, that the luminous spots which form on the ground in the shade of a foliage took the shape of a crescent. He would have deduced that these spots were in fact images of the sun and thus discovered the phenomenon of the camera obscura. It is this same light, passing through the leaves of the trees, that is also found in Renoir’s Bal du Moulin de la Galette and in many Impressionist paintings. We could say that with these photographs by Frank Horvat, we therefore go from the camera obcura to the nightclub and that we are there even inside to directly observe what is happening, as if given over to the pure sensation.

It was after several years that I realized that there was a connection between some of the photographs I was taking and these photographs by Frank Horvat linked by the theme, as for example in the photographs of the burlesque artists that I made in 2012 (Bob series), but above all linked formally , as in the Black-Eyed Susan series, which I made in 2010 and of which  I present a picture. I have used other means, in particular digital, but the intention is the same: I simulate a projection of light patterns on the surface of a face, as if I had used a slide projector in the dim light of the studio or nightclub lighting. So I metaphorically use the same kind of luminous artifice that is at work in the Strip-tease series.

This exhibition is therefore an opportunity for me to pay tribute to a photographer whose very great diversity in his work, his sense of experimentation and his inventiveness I appreciate – and who influenced me by the memories I have kept from this particular series of photographs.

From the camera obscura to the nightclub. Frank Horvat as seen by Valérie Belin.